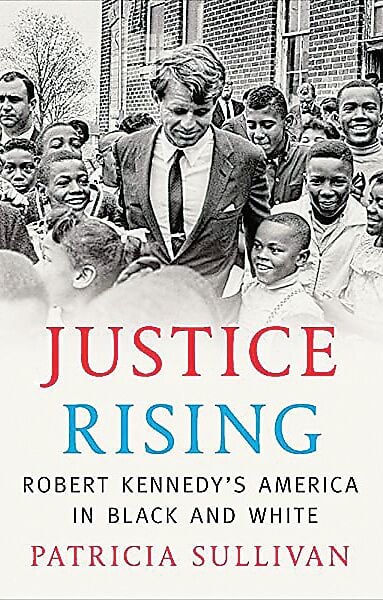 As he accompanied Kennedy through Black and Latino neighborhoods in Los Angeles during the 1968 Democratic presidential primary, John Lewis concluded that the outpouring of emotion for the candidate “was love. It was adoration.  People, especially young people, just mobbed us, climbing over cars, trying to get close” to him.

In “Justice Rising,” Patricia Sullivan, a professor of history at the University of South Carolina, assesses Kennedy’s life and legacy.

Sullivan asserts that as U.S. attorney general and senator from New York in the 1960s, RFK “stood out as a national leader challenging the racially coded politics of law and order,” fought to alter conditions that trapped African Americans in poverty, joblessness and urban ghettoes, and overcome white resistance.

Robert Kennedy’s Justice Department, Sullivan said, put the federal government on the side of equal rights for Blacks. The DOJ advanced school integration in the South through pressure and persuasion. In Mississippi alone, Kennedy’s DOJ filed 24 suits for violations of voting rights. Kennedy was the first Attorney General to get a reluctant J. Edgar Hoover to assign FBI agents to infiltrate the Ku Klux Klan.

Although Sullivan does not give President Lyndon Johnson sufficient credit for steering the Civil Rights Act of 1964 through Congress, she is right to point to the pivotal role Kennedy played.

Sullivan also provides a sobering analysis of the forces arrayed against advocates of racial justice. Desegregation suits took years to move through the courts.  Ballot access was controlled by local officials. Executive orders “by the stroke of a pen” sound easy, Sullivan indicates, but often meet resistance.

In the ‘60s, civil rights legislation depended on a substantial number of Republican senators to vote to end filibusters by southern Democrats. Moreover, Senator Kennedy told journalists, anyone who thought a bill or series of bills could make racial discrimination “go away is out of his mind.”

Underestimating Kennedy’s ruthlessness and political ambition, Sullivan suggests that his legacy rests on his cogent, candid, courageous, and controversial analysis of race in America.  Highlighting looting, arson, and violence during the 1965 riots in Watts, California without considering the reasons for despair, hopelessness and anger, Kennedy declared, fed a “harsh and bitter white reaction” that made it virtually impossible to address race-based inequality.

When students at Indiana University School of Medicine claimed that ghetto residents’ health needs were adequately served and asked where he’d get money to subsidize insurance, Kennedy (who was then campaigning in Indiana’s presidential primary) shot back, “From you. It’s our responsibility, too.” Americans spend twice as much on pets as the poverty program, he added: “You are the privileged ones…. You sit here…. while Black people carry the burden in Vietnam.”

Robert Kennedy, Sullivan points out, was also one of a very few politicians in the last 60 years to try to assemble a political coalition of Blacks, Latinos and working-class whites.

Most important, perhaps, “Justice Rising” reminds us that although he was assassinated over 50 years ago, Kennedy remains relevant in 2021.

RFK drew attention to what is now called “systemic racism.” He sounded the alarm against voter suppression.  And Kennedy noted that people who preach intolerance spread conspiracies, in an attempt to “escape reality and responsibility by a slogan or a scapegoat.”