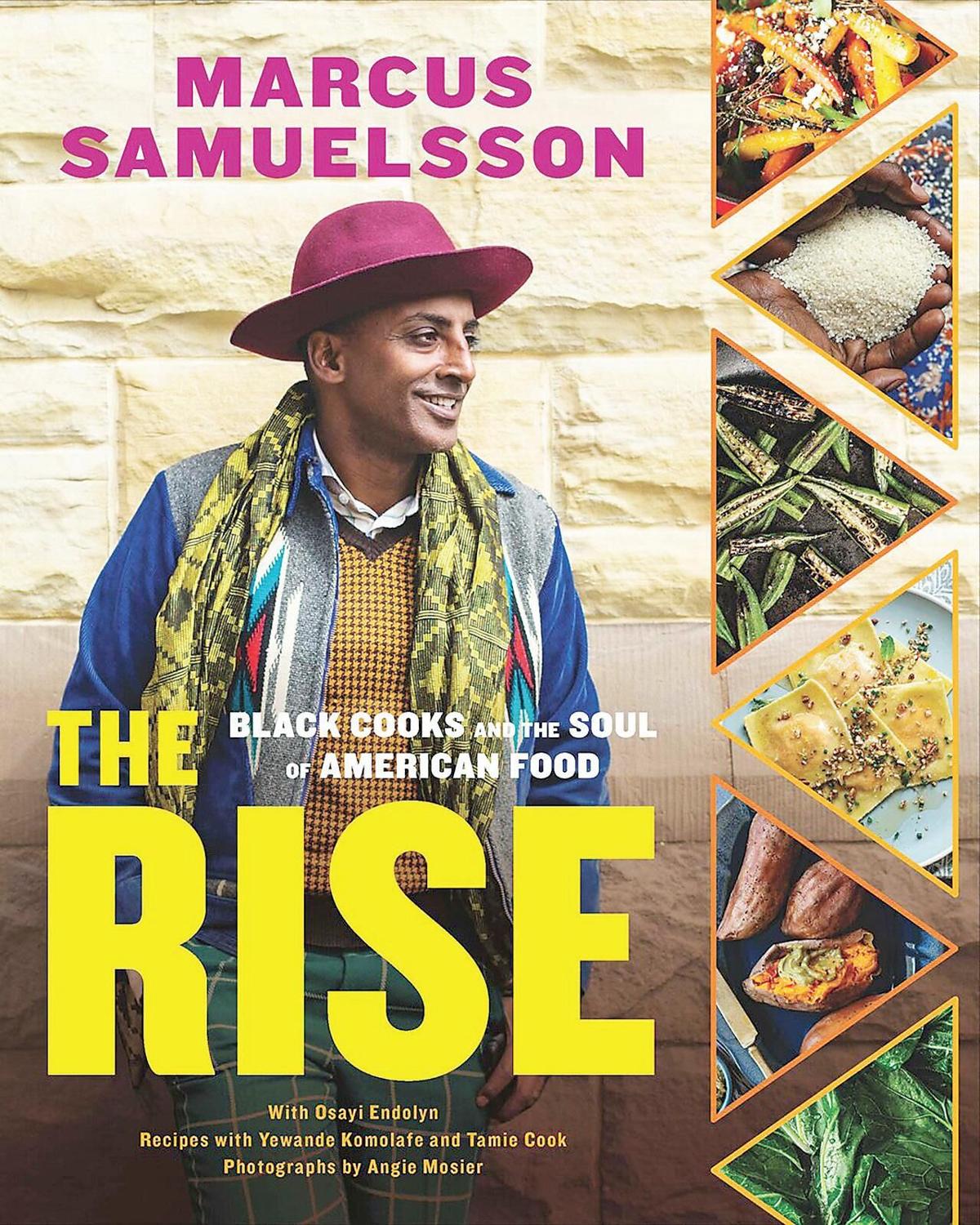 In “The Rise,” Marcus Samuelsson profiles culinary professionals who are shaping the future of Black food in America. VORACIOUS/TNS 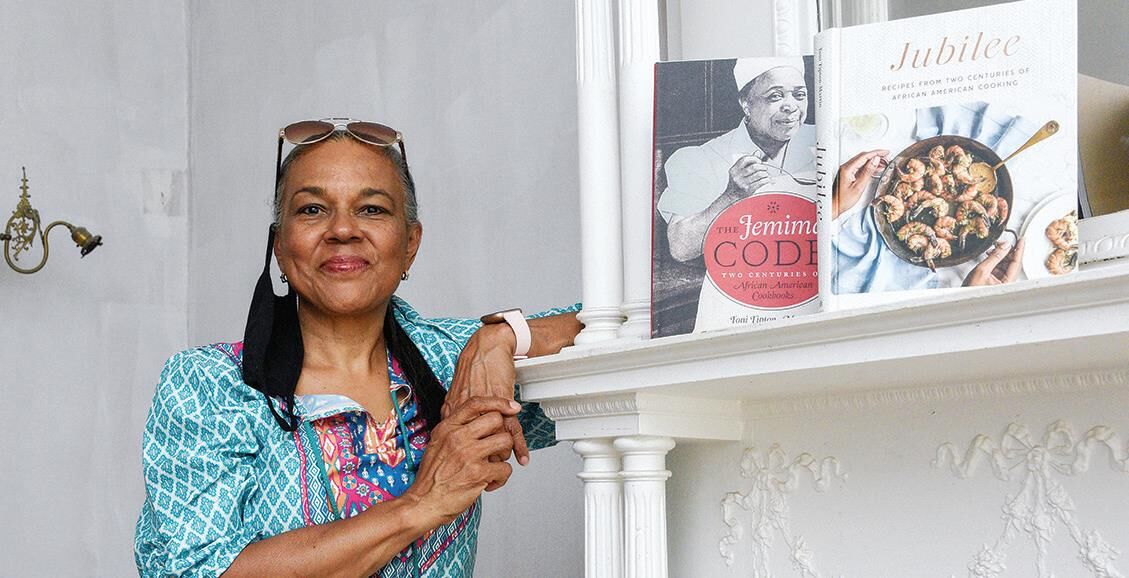 To fully understand the complexity of Blackness, a good place to start is food, Marcus Samuelsson says.

The Ethiopian-born, Sweden-raised, Harlem-based chef has teamed up with co-writer Osayi Endolyn and a pair of recipe developers, Yewande Komolafe and Tamie Cook, to publish “The Rise: Black Cooks and the Soul of American Food.”

The book profiles dozens of culinary professionals who are shaping the future of Black food in America, including Tavel Bristol-Joseph, the award-winning chef behind Emmer & Rye, Hestia, Kalimotxo and TLV in Austin.

Austin chef Tavel Bristol-Joseph, who is from Guyana, makes food influenced by his travels and experience in culinary school.

Bristol-Joseph, who was named a Food & Wine Best New Chef last year, grew up climbing coconut trees in his native Guyana, but he says his cooking is equally as inspired by his travels around the world.

“If you’re being true as a chef or creator, you are influenced by everything you’ve experienced in your life,” Bristol-Joseph says.

“I don’t want to put myself in a box and say I’m only doing Caribbean food. I want to be true to myself and the guests and say, ‘Hey, I remember walking in Japan, and I had this food at this stall.’ How do I bring that into my restaurant? How do I create and be inspired by that?”

The African diaspora reaches to most corners of the planet, from Brazil, Suriname and Guyana to Mexico, the Caribbean and the U.K. Black people have been living from Australia to Sweden for generations, by choice or by force.

Black food can be California food, in the case of “Jemima Code” author (and Los Angeles native and former Austinite) Toni Tipton-Martin, who is now the editor-in-chief of Cook’s Country magazine. Black food can have Asian influences, as in the case of Nyesha Arrington, whose roots extend to both Mississippi and Korea.

Black food can have hints of both Haiti and the Pacific Northwest, which is what you might find at a restaurant helmed by Gregory Gourdet, the Portland-based chef whose first cookbook is slated to come out later this year.

Pepperpot is a dish that Tavel Bristol-Joseph grew up eating in his native Guyana. It’s one of three recipes created in his honor in “The Rise.”

An anonymous cook in San Diego who identifies as a Black Mexican — and requested anonymity in “The Rise” book because he is undocumented — cooks food that looks very different than what Nina Compton serves at her upscale New Orleans restaurant that specializes in St. Lucian-French-Italian cuisine influenced by her own lineage and culinary training.

“I wanted to do a book that I wish I had when I was 18 or 19” to show that diversity of Black excellence, Samuelsson said in a recent Zoom call with Bristol-Joseph about the book. “We share being Black, but I wanted to show that our journeys are not monolithic,” Samuelsson says.

Food historians and culinary anthropologists have named five original cuisines that stem from non-immigrant Black culture in the U.S. — Lowcountry, Southern food, Cajun, Creole and barbecue — but when we look at Black immigrant foodways in addition to those original cuisines, “we start to understand the complexity of Blackness,” Samuelsson says.

“We have to rewrite history and establish authorship,” Samuelsson said. “There’s a reason why we love Italian food and we know so much about it, and it’s because it’s been written about so much.

“Writing inspired people to travel there, which deepened people’s understanding and love of the cuisine. So now, many people understand the differences between Rome or Naples.”

By reading more about Black chefs from various backgrounds and then seeking out their food, we can start to deepen that appreciation and understanding, Samuelsson says.

Samuelsson says that getting out of Black food myopia is an important step toward the cultural reparations that are long overdue.

“There’s a parallel dialogue about social justice,” Samuelsson says. “What could be more delicious than cooking Black food at home and having these conversations at the dinner table inspired by the food?”

Chef Tavel Bristol-Joseph, who participated in the 2019 Hot Luck Fest, is starting a scholarship program with Austin Community College later this year.

By seeking out benne seeds, teff flour or berbere, we aren’t just learning to say the words; we also are making a connection with culture, geography and history.

It’s also limiting, both chefs say, to expect that Black chefs prepare only Black food or food from their own cultural background. For example, the food that Bristol-Joseph serves at his restaurants reflects his journey from a Caribbean-influenced country of birth to New York, through travels to Europe, culinary school in Arizona and then to Texas.

“I embody all of that. I carry my history with me every day, and my inspiration comes from those trips and those life experiences,” Bristol-Joseph says.

Bristol-Joseph hasn’t made a name for himself cooking the Guyanese foods of his youth, but he says seeing recipes inspired by his heritage in “The Rise” — oxtail pepper pot with dumplings, smoked venison with roti and coconut fried chicken with plantains — gives him the confidence to go out and cook it for customers.

“The book is not just to inspire young chefs or people who are trying to come up,” he says. “It’s inspiring people like me who have been in the game for a long time.”

Samuelsson says he could have written five editions of “The Rise” with the number of Black chefs he wanted to feature, but rather than leaving them out of the book altogether, he included a list of more than 200 Black culinary professionals and their Instagram handles.

“People are always asking me how they can help, and I tell them, ‘Go follow these people, buy takeout from their restaurant, buy a baseball hat from the restaurant,’” he says. “You might say you don’t know any Black chefs, but you are already eating their food.”

Oxtail is one of my favorite meats and I like it best when it has been slow-cooked for hours, so I recommend cooking it the day before and letting it sit overnight. What makes this dish so homey and delicious is the mix of the oxtail and the dumplings, which everyone can relate to as being an example of comfort food at its finest.

This traditional Caribbean dish — mostly from Guyana — is made by stewing meat in a dark, rich gravy flavored with cinnamon, brown sugar, hot chiles and cassareep, a special brown sauce made from cassava root.

African Americans adapted the recipe using oxtail instead of offal, which are the internal organs of butchered animals. Regardless, this is a dish that only gets better with time in the pot.

For the oxtail: Season the oxtail on all sides with the salt and pepper. Heat 1/4 cup of the oil ina large (8-quart) Dutch oven set over medium-high heat. When the oil shimmers, add the oxtail and brown on both sides, about 15 minutes.

Remove the oxtail to a paper towel-lined dish. Heat the remaining 1/4 cup oil in the Dutch oven and add the carrots, onion, garlic, ginger, tomatoes, scallions, chile, thyme, brown sugar, soy sauce, ketchup and allspice and stir to combine. Return the oxtail to the pot, add the chicken stock and bring to a simmer. Reduce the heat to maintain a simmer and cook, covered, for 2 1/2 hours, or until the oxtail is tender and the meat is falling away from the bone.

For the dumplings: Place the flour, cornmeal and salt in a medium bowl and stir to combine. Add the water and use your hands to work the mixture into a dough ball. Knead the dough in the bowl for 2 to 3 minutes. Divide the dough in half and cover one half with a damp towel.

Continue to knead one dough ball for 5 minutes, or until smooth. Roll the piece of dough into a 21- to 24- inch snake-like piece. Cut the dough into 1-inch pieces, set on a baking sheet, and cover with a damp towel. Repeat with remaining dough ball.

Stir the dumplings into the oxtail stew for the last 30 minutes of cooking time and cook until dumplings are tender and cooked through. Serves 4 to 6.

From “The Rise: Black Cooks and the Soul of American Food” by Marcus Samuelsson and Osayi Endolyn