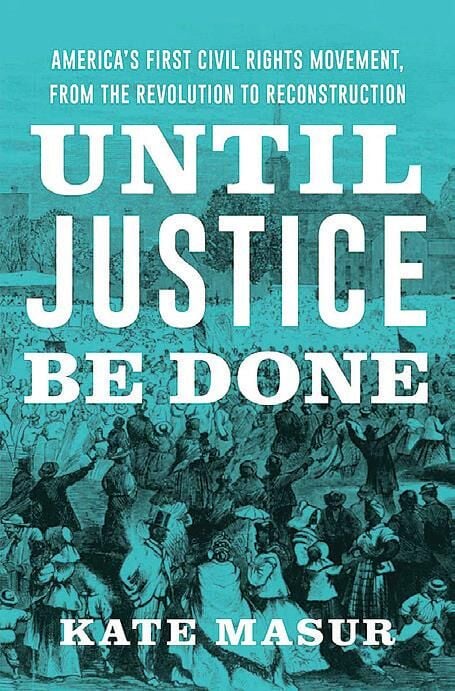 In an 11-page pamphlet published in 1813 titled “Letters from a Man of Colour, on a Late Bill, Before the Senate in Pennsylvania,’’ James Forten, a free Black from Philadelphia, declared that the egalitarian principles of the Declaration of Independence included “the Indian and the European, the Savage and the Saint, the Peruvian and the Laplander, the White Man and the African.”

A proposed law compelling all Blacks to register with the state, Forten claimed, would invite police officers to arrest “any Black, whether a vagrant or a man of reputable character, who cannot produce a Certificate.”

The Senate did not pass the law.Other “free states,” however, did enact anti-Black legislation.

Forten’s protest, Kate Masur (a professor of history at Northwestern University and the author of “An Example for All the Land: Emancipation and the Struggle Over Equality in Washington, D.C.’’) reminds us, voiced themes that were central to the struggle against racism in the decades before the Civil War.

In “Until Justice Be Done,’’ Masur examines the demands of African Americans and their allies for the same rights and legal protections granted to Whites. Often overlooked, the first civil rights movement, Masur demonstrates, helped make their vision of equality more “mainstream.”

Masur reviews the activities, well-known to historians, of Garrisonian abolitionists, the short-lived Liberty Party and Free-Soil Party, and the Republican Party, which opposed the extension of slavery to the territories acquired by the United States in the Mexican War.

Many members of these predominantly White groups, she indicates, supported racial equality as well as an end to human bondage.

Masur also examines less familiar controversies, especially the arrest of free Black sailors, as they unloaded goods in Southern ports.The action was justified as part of the police powers of each state.

Luke Thompson, a sailor from Maine, was thrown in jail in New Orleans, for example, because his “protection certificate” indicated his eyes were “black,” while local authorities deemed them “light-colored.”

Thompson might well have faced hard labor on a chain gain or been sold into slavery, Masur points out, if Boston lawyer Ellis Gray Loring had not shown that the certificate’s description of a scar on his head proved he was who he claimed to be.

Denied the vote, they entered the political conversation by petitioning state legislatures and the United States Congress.Maintaining they were American citizens, they cited the “privileges and immunities” clause of the Constitution.

They protested in public despite the likelihood of retribution and violence.

When the Black community in Zanesville, Ohio, numbering four or five hundred people, established an anti-slavery society, Masur writes, residents were fired from their jobs; Whites for whom they worked were prosecuted under vandalism laws for employing them.

Nonetheless, many of them refused to back down or give up.

“In common with other citizens, we have rights which are dear to us,” the Freedom Journal asserted in 1828. “We shall never sit patiently… without entering our protest against the unconstitutionality of all laws which tend toward curtailing them in the least degree.”

At a convention held in Syracuse, New York, in 1864, African American delegates insisted, “it is plain, that in the matter of government, the object of which is the protection and security of human rights, prejudice should be allowed no voice whatever.”

Although the Civil War ended slavery, it did not, alas, end racial prejudice. And in the last three decades of the 19th century, the 14th and 15th Amendments to the Constitution were gutted by the Supreme Court.

That said, Masur concludes that while antebellum activists did not secure racial equality in the United States, the mid-20th century civil rights movement “echoed and expanded their agenda.”

Among the lessons Rev. Martin Luther King Jr. learned from the courageous reformers of “Until Justice Be Done’’ isthat “It may be true that morality cannot be legislated, but behavior can be regulated… the law cannot make a man love me, but it can keep him from lynching me… the law cannot change the heart, but it can restrain the heartless.”