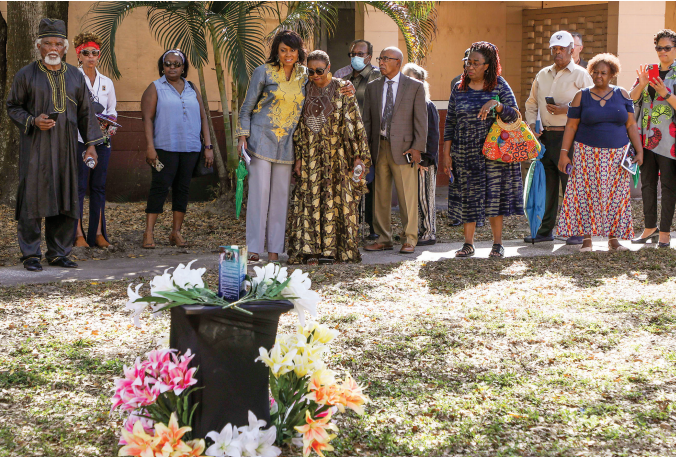 Karema Tyms Harris comforts her mother Jeraldene Williams, center, in front of a memorial during the funeral service on Feb. 17 for her great-great-great grandmother Anna Wyche, who is among those buried at the erased Zion Cemetery, where Robles Park Village now stands in Tampa. 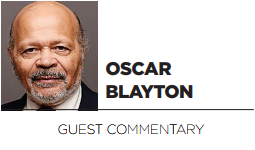 It is a tragedy when we lose a loved one. That tragedy is compounded when are unable to visit their final resting place to honor and remember them.

Black cemeteries have been under assault by antagonistic forces in this country since the very first Black body was interred in American soil. And that assault continues to this day.

The most recent assault comes in the form of a bill being proposed in the U.S. Congress titled the African American Burial Grounds Preservation Act.

This bill introduced by Congresswoman Alma Adams (D-NC) and Reps. A. Donald McEachin (D-VA) and Brian Fitzpatrick (R-PA) is akin to a mushroom – raised in the dark and nurtured on manure.

I would venture to guess that none of these Congressional representatives has given serious consideration to the wording of this bill or its implications for the families and the descendant community of those buried in Black cemeteries.

It seems to be the case that an organization in Richmond, Va., known as Cultural Heritage Partners, is the architect of this bill and I can find no convincing connection between this group and a motivation to preserve Black cemeteries for the sake of Black descendants or to honor their dead.

In a recent meeting with congressional staffers familiar with this bill, it became clear to descendants of those buried in Black cemeteries, as well as other stakeholders, that little, if any, input was sought from the Black community as this bill was being drafted.

It also was telling that a request was made by a congressional staffer that the meeting’s discussion be “off the record.” The only time someone wants a discussion to be off the record is when they want to keep information from the public.

While all the individuals at the meeting representing descendant groups are very active in trying to preserve Black cemeteries and raised important concerns during the meeting, two individuals pointed out issues that need to be reiterated here.

Dr. Blakey informed the congressional staffers that individuals and groups within the African American descendant community should be considered stakeholders, entitling them to direct involvement in making decisions about how best to manage burial grounds.

This would include involvement in decisions related to the handling of accidentally exposed remains or those subject to removal.

Another consideration of importance was raised by Brian Palmer, a Peabody Award-winning multimedia journalist whose work has appeared in the New York Times and Smithsonian magazine and on PBS, CNN, and the BBC as well as other print and broadcast outlets.

He is a former bureau chief of U.S. News & World Report’s Beijing bureau and is a visiting professor of journalism at the Columbia Journalism School.

For years, Mr. Palmer actively has been involved in securing the rights of descendants of African Americans buried in Black cemeteries in Virginia and across the country.

Mr. Palmer raised the point that while individuals who have purchased burial plots do not technically own the land on which those plots sit, they still have ethical and moral rights that should be recognized in this legislation.

Their ties to these sites should grant them parity with property owners.

Dr. Blakey, Mr. Palmer and others pointed out that this legislation as written will harm, rather than protect, descendant communities and the Black community at large.

While Rep. Adams and Rep. McEachin may be well intentioned, their lack of attention to detail in the language of this bill is concerning.

That, coupled with the fact that they have joined as co-sponsors with a Republican congressman who refused to vote to impeach Donald Trump for the January 6th insurrection, raises a glaring red flag.

Our representatives in Congress must be more astute when signing on to legislation. Just because a bill has the words “Black” or “African American” in its title does not mean that it is meant for our benefit.

The African American Burial Grounds Preservation Act is worded in such a way that the major beneficiaries will be the owners of the land where the Black cemeteries are located, while at the same time disempowering the descendants of those buried there.

This bill would create great windfalls for white property owners who happen to have African American burial sites on their land, while freezing out the descendants of the deceased buried there.

Thousands of Black cemeteries are spread across America and many of them are in need of care. But a Trojan horse of a bill disguised as a boon to these cemeteries is in actuality a mechanism to further disempower those who care for the graves of the departed.

The bill as written is not a solution to the problem. Instead, it will be a further cause of damage, and possibly outrage.

Before the African American Burial Grounds Preservation Act becomes law, we must raise our voices and let Congress know that we do not want white opportunists to use the bodies of our deceased ancestors to line their pockets with government money at the expense of the descendants of those who are buried on their land.