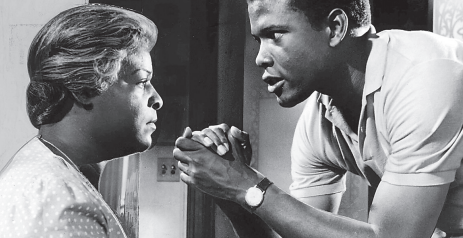 Claudia McNeil and Sidney Poitier starred in 1961’s “A Raisin in the Sun.” 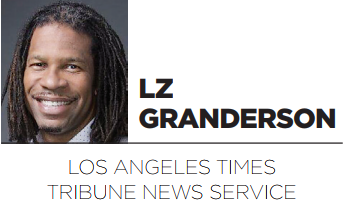 The first time Sidney Poitier walked into the room, I stopped talking.

I think I might’ve even held my breath for a few seconds, afraid my inhaling would draw too much attention. Felt like we all did.

It was the set of the 1996 madefor-TV sequel “To Sir, With Love II,” and no one had to tell any of us young actors what it meant to be in the room with the “Mr. Thackeray.”

Prior to that day I had seen the 1967 original a half-dozen times, but the first Sidney Poitier movie I ever saw was 1975’s “Let’s Do It Again.” Us kids watched because we loved “Good Times,” and both John Amos and Jimmie Walker, who played James and J.J. in the sitcom, were in it.

My mother wanted to watch Sidney, who with Dr. Martin Luther King Jr. were the only nonfamily members whose pictures hung on our wall.

In addition to loving his movies, my mother is from the Greenwood, Mississippi, area — not far from where Emmett Till’s body was found — and remembers Sidney along with Harry Belafonte going there to help with voter registration in the 1960s.

My mother participated in similar efforts, and like the two of them, encountered the KKK. Needless to say, when I told her I had been cast in “To Sir,” she was more excited than I was. She didn’t get the chance to meet him, but I did ask Sidney if he would speak to her on the phone and he happily obliged.

After he introduced himself, her scream was so loud he initially had to hold my cellphone a few extra inches away from his ear. I sheepishly looked down, wondering if he had already regretted his decision.

Instead, he spent the next 10 minutes telling her how much he enjoyed working with me and that I carried myself on set with dignity. He ended by congratulating her on the job she had done raising me.

I’m tearing up a little just thinking about how much that conversation means to her still, more than 25 years later.

I have a lot of stories from weeks on set with Sidney, who died on Thursday, Jan.6, but what I hold closest to my heart is how generous he was with his time — and not just on that day but during the entire shoot.

My character, Archie, was a secondary one, but I had a fair number of scenes with him. During breaks, I would ask questions about the scene and he usually answered them with a question, encouraging me to find the answers within myself.

Occasionally, I would catch myself on set just watching him, caught somewhere between admiration and disbelief.

One day, I told him that while in college I played Walter Lee Younger, the role in “A Raisin in The Sun” that he immortalized on Broadway and in the movie.

As we talked about the complexity of the character, Sidney told me that the way I portrayed Walter Lee then would be very different when I got a little older.

At the time, I thought I understood what he was saying, but it really wasn’t until I had reached my 30s and had a son of my own — like Walter Lee — that the deeper meaning behind those words materialized for me.

Sidney wasn’t really talking about acting. He was referring to my maturation as a Black man in this country and the importance of bringing that lived experience with me everywhere I went.

This may be why he was so thoughtful in the roles he accepted.

Like some of his contemporaries we lost in 2021 — people like Cicely Tyson, Hank Aaron, Gen. Colin Powell — Sidney understood that because of his station in life, he was representing more than just himself, whether he wanted to or not.

A dignity that could get you killed, which is why he kept a gun under his hotel pillow in Dyersburg, Tennessee, during parts of the filming of 1967’s “In the Heat of the Night.” Many are familiar with “the slap heard round the world” — the scene in which Sidney’s character slaps a bigoted cotton plantation owner after the owner slaps him first.

But as the director Norman Jewison said, “This was not a period film. It was taking place in the present time.”

To his point, James Meredith, the first Black student to enroll at the University of Mississippi, was shot by a white man the year before the film’s release. Both King and Robert Kennedy were assassinated the year after.

Such courage cannot be underestimated in considering his career — just as we can’t underestimate the courage it took for Aaron to face down death threats on his way to breaking Babe Ruth’s home run record or for Tyson to go without work because she refused to play characters that dehumanized Black people.

One of my favorite scenes in “To Sir” with Sidney takes place in the classroom. After quickly de-escalating a fight between another student and me, he asks my character if my mother had a formal education.

When I reply no, my older brother pushes back, telling Mr. Thackeray that our mother has two jobs and that “she work her ass off.”

That’s when Mr. Thackeray says “all of us are here because our mothers or our fathers or someone figured out some way to survive. Now it’s your turn.”

Indeed … now it is our turn to figure out how to survive.

LZ Granderson is an Op-Ed columnist for the Los Angeles Times.