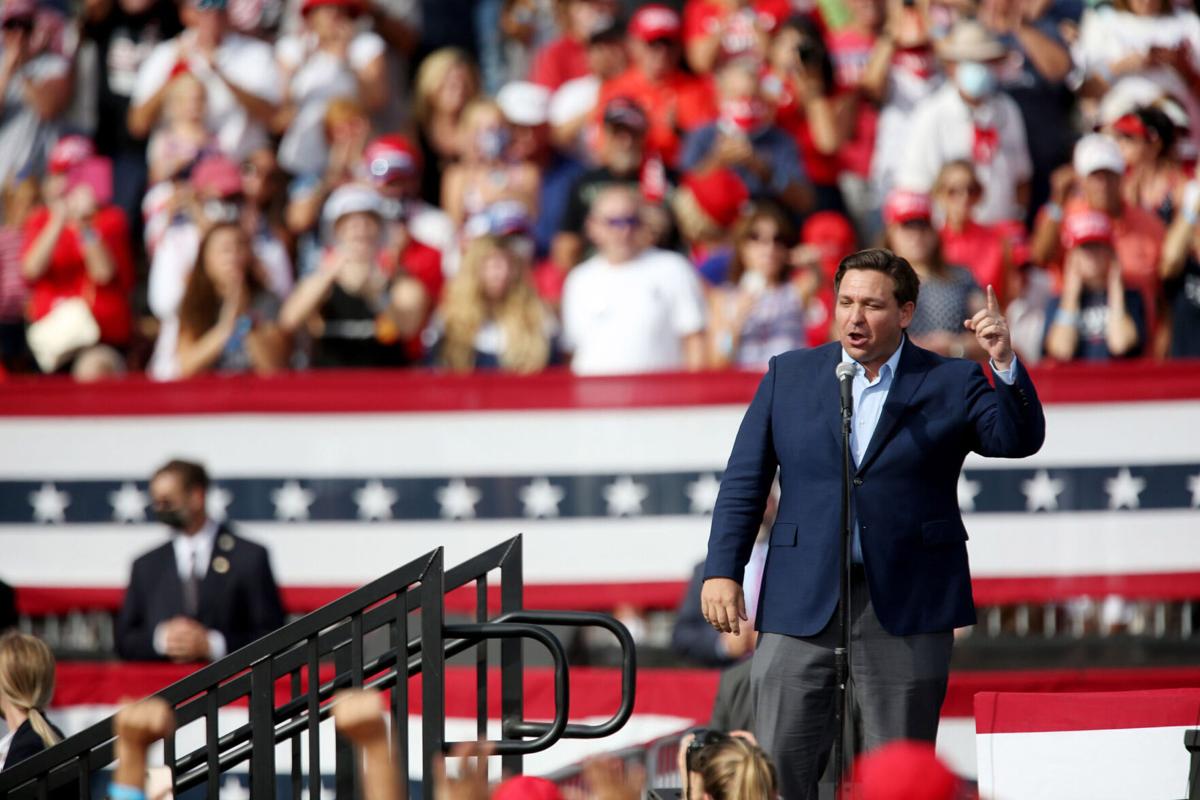 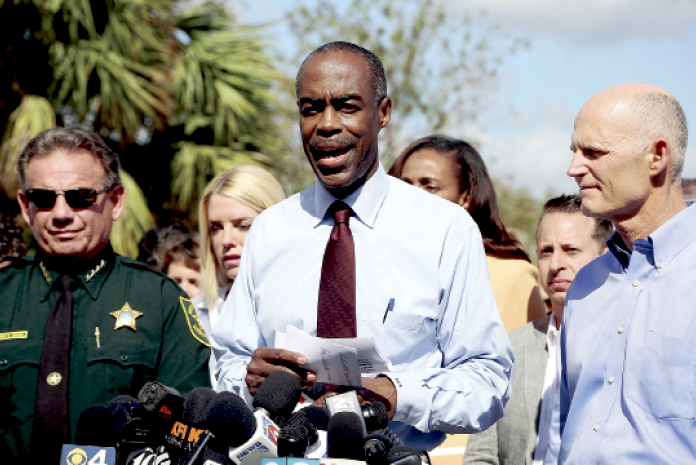 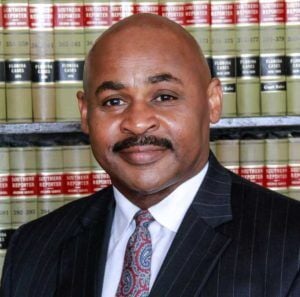 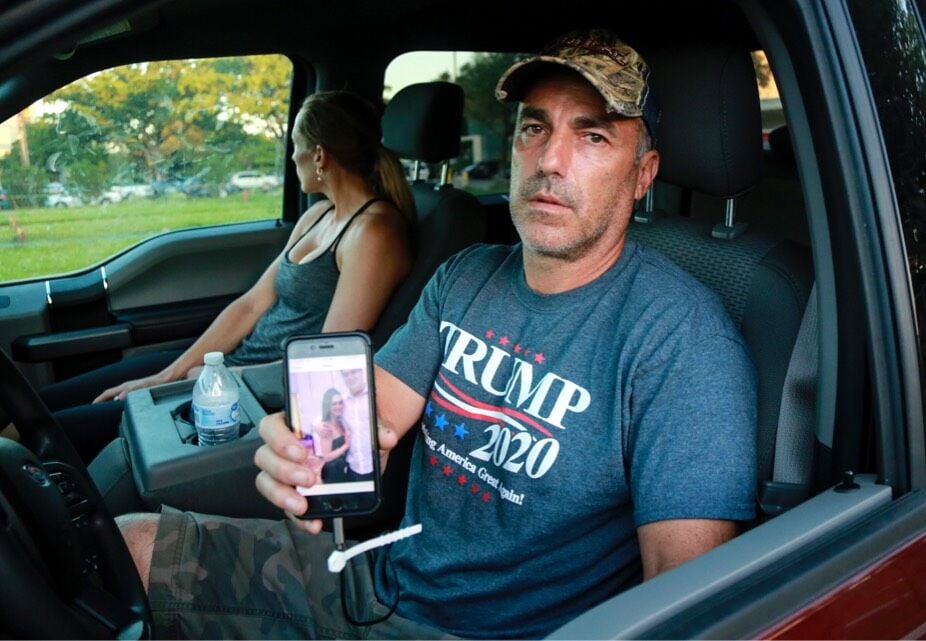 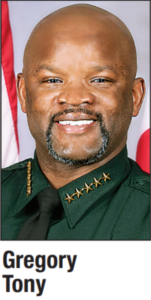 To keep his gubernatorial and presidential ambitions on track, former federal prosecutor and current Gov. Ron DeSantis stretches Florida’s secret grand jury system to its maximum point with a singular focus: to send one man, Robert Runcie, ‘back home to Chicago,’ according to Runcie’s defenders.

PARKLAND, FL. –Feb. 14, 2018. Seventeen people, including 14 teenagers, are shot dead at a Broward County high school by a former student in what became known as the Marjory Stoneman Douglas (MSD) massacre.

The aftermath can be broadly quantified.

Millions of words spoken and written about the tragedy. Thousands of pages of reports produced by dozens of official and unofficial investigations. Hundreds of court pleadings filed as a consequence of a mass of lawsuits.

But to some, what also stands out more than 1,000 days after the murders is the number “one.”

How? As Runcie’s defenders, including his criminal defense co-counsel, Johnny L. McCray, Jr., of Pompano Beach, tell it, it’s by manufacturing a single count of perjury by a statewide grand jury after a two-year exhaustive investigation across three of Florida’s largest counties.

Here’s a timeline, including how DeSantis – who launched his official 2018 gubernatorial campaign 40 days before the murders – lashed himself to a handful of victims’ families in the initial stages and with them targeted Runcie for removal, by any means necessary, from the start, according to Runcie defenders.

• May 10, 2018:Andrew Pollack, father of MSD victim Meadow Pollack, records a campaign robocall paid for by DeSantis that suggests a DeSantis victory will “ensure that no parent loses their child in a school shooting again.” Pollack calls Democrat gubernatorial candidate Andrew Gillum “dangerous for Florida.”

According to a Miami New Times article dated July 24, 2018, Pollack was “the face of the conservative post-Parkland movement, “an enthusiastic Trump voter…(with) a deep resentment toward immigrants, particularly Muslims… And he is unsympathetic to concerns that increased security presence and stricter discipline programs could negatively affect students of color.”

• Aug. 19, 2018: Candidate DeSantis publicly announces his intention to remove Runcie and supports efforts to change the makeup of the Broward School Board.

• Dec. 13, 2018: DeSantis announces that his transition advisory team will include Andrew Pollack and his son Hunter Pollack, as well as Ryan Petty and Max Schacter – two parents whose children were murdered at MSD.

• Jan. 2, 2019:  Florida’s MSD Public Safety Commission Interim Report No. 1 concludes that the Broward PROMISE program was not related to the shooting. The report critiques the MSD on-campus administration, Broward School Board oversight, and the providing of mental health services in public schools across Florida. The report does not blame Runcie or the Broward School Board for the shootings.

• Jan. 4, 2019: Gov. Rick Scott, in the final week of his term, nominates Andrew Pollack to the Florida State Board of Education pending Senate approval.

the first Black sheriff in Broward County’s history, to serve at the request of Parkland parents. “We all went to the same gym together and that’s where we all met,” said Andrew Pollack.

Pollack emceed the parents’ portion of the suspension announcement event at the Broward Sheriff’s Office headquarters and said he’d see to it himself that Runcie loses his job. DeSantis said he wasn’t sure if he had the legal authority as governor to suspend an appointed superintendent.

• Jan. 17, 2019:Pollack, a newly named member of the state Board of Education, announces his first intention is to remove Runcie.

“One way or another – I’ll get to Robert Runcie…I’m not going to be done until I get rid of this Robert Runcie – and he knows it…My daughter was murdered on that third floor, and he’s responsible, and I’m going to make him pay. … I’m going to hold him to it.”

• Jan. 30, 2019:DeSantis acknowledges he lacks statutory authority to remove Runcie, looking at options to remove Broward School Board members. “There may be options where we can look at accountability there, but it will be different than me saying the superintendent is out.”

• Feb. 13, 2019:DeSantis calls for a statewide grand jury, allegedly to investigate “whether refusal or failure to follow the mandates of school-related safety laws…results in unnecessary and avoidable risk to students across the state.”

The grand jury’s three investigational responsibilities also seem to be directed at Broward County school officials, with its language exactly tracking the complaints that Pollock and other MDS parents have had about Runcie and the Broward County School Board.

• March 5, 2019: The Broward County School Board refuses to fire Runcie.

• March 5, 2019: In his State of the State Address, DeSantis criticizes Runcie, but not by name: “When I took office, many of the Parkland families felt that there had not been any accountability – at the school district or at the sheriff’s office – for the string of failures that culminated in the massacre. So, I acted by successfully petitioning for a statewide grand jury investigation into school security failures in Broward County and other jurisdictions.”

• April 23, 2019: An investigative article in the Huffington Post shows how the MSD tragedy has been highly politicized to blame Runcie and force his removal.

• Oct. 19: 2019: The Southern Poverty Law Center (SPLC) releases a report highlighting how Florida’s MSD Commission has been constructed to conclude that more criminalization of youth is justified.

According to the report, “Florida legislators focused only on physical security and law enforcement solutions, ignoring core issues involving gun safety, mental health, and the privacy rights of students. The Commission’s membership and first-round recommendations reflect these misguided priorities. In particular, the Commission is dominated by appointees with law-enforcement backgrounds who have focused on law enforcement solutions to the exclusion of any other more comprehensive, evidence-based school safety solutions advocated by students, families, educators, and experts in the field. The result is an initial report whose main recommendations range from wasteful (spending more on unproven security measures) to actively dangerous (putting guns in the hands of non-law enforcement school employees).”

The SPLC report continued: “None of the Commission’s appointees are current educators, nor are any current students. The Commission also lacks the diversity represented in public schools across the state; most or all of its voting members appear to be White. In addition to people of color, noticeably omitted from the Commission are the founders of March for Our Lives, the youth-led group founded by Parkland survivors who do not support the Commission’s recommendations. Neither they nor or any other youth-led organization working to bring real school safety to Florida’s schools are members.”

• Jan. 20, 2020:DeSantis appoints Ryan Petty, whose daughter was a victim of the MDS shooting, to the Florida Department of Education.

• Feb. 9, 2021:Broward circuit court judge Patti Englander Henning ruled that the Broward County school district cannot be held liable for failing to predict actions that were beyond its control.

“The District had no control over (Nikolas) Cruz,” the judge ruled. “They did not have custody over him. He was not a student in the system and had not been for over a year. In fact, he was refused access to the campus once he left school. Nor did the district have pre-knowledge of a definitive threat by Cruz.

“There is no foundation for the argument that if Cruz had been sent to a different program, and if he had been treated as a higher threat years before the incident, and if he had been criminally charged years earlier so he’d have been convicted and could not buy or own a gun, and if he had never been permitted to attend Marjory Stoneman Douglas, then he would not have been on this campus and would never have committed the crime.”

• April 15, 2021: Robert Runcie is indicted for a single charge of perjury in an official proceeding. Here’s a paraphrased summary of the single charge:

…Defendant ROBERT W. RUNCIE, while testifying under oath in an official proceeding, to wit, the Twentieth Statewide Grand Jury… did make a false statement which ROBERT W. RUNCIE did not believe to be true, in regard to a material matter…in violation of…the Florida Statutes.

The single false statement allegedly occurred during a two-day, 18-hour interrogation of Runcie by the grand jury on March 31 and April 1, according to court pleadings filed by Runcie’s attorneys.