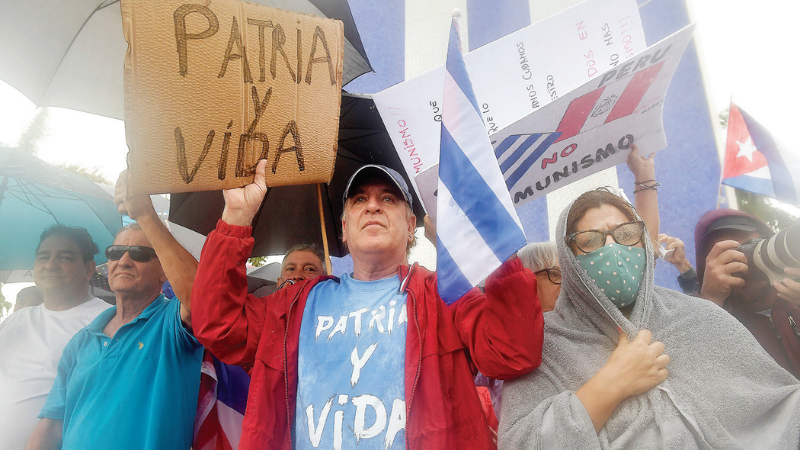 Hundreds of people participate in a communitywide rally in support of freedom in Cuba at the Cuban Memorial at Miami’s Tamiami Park on July 13. 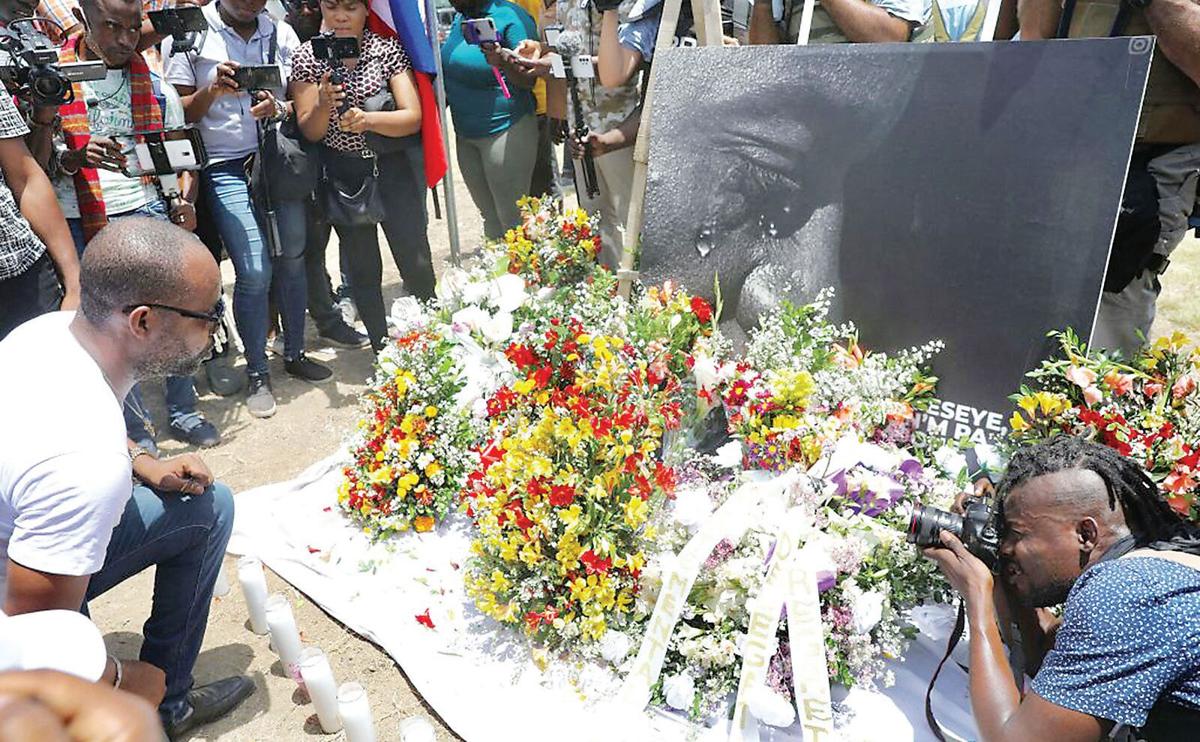 People pay their respects outside of the Presidential Palace in Port-au-Prince on July 14 in the wake of Haitian President Jovenel Moïse’s assassination that occurred early on July 7.

WASHINGTON — They are two tiny Caribbean states whose intractable problems have vexed U.S. presidents for decades. Now, Haiti and Cuba are suddenly posing a growing challenge for President Joe Biden that could have political ramifications for him in the battleground state of Florida.

Cuban demonstrators have taken to the country’s streets in recent days to lash out at the communist government, and protest food shortages and high prices amid the coronavirus pandemic.

In Haiti, officials are asking the U.S. to intercede in a roiling political crisis after last week’s assassination of President Jovenel Moïse in a nation where military and humanitarian interventions by U.S. presidents from Woodrow Wilson to Barack Obama have proved to be politically harrowing.

Biden is facing increased pressure from Republican lawmakers for his administration to step up support of Cuban demonstrators. And his aides have demonstrated determined caution in response to requests for more U.S. involvement in Haiti.

The administration has come under fire from both sides of the political spectrum for its responses to each of the crises, both unfolding less than two hours’ flying time from Miami. The troubled U.S. history in both countries has hardened positions, making virtually any policy decision politically unpalatable for a president seeking to toe a middle line.

In the background: How the Biden administration handles the crises looms large in electorally rich Florida. Biden lost the state in 2020 to Donald Trump, as Republicans improved their performance while paying special attention to courting the state’s large Cuban American population and other immigrant voters, noted Susan MacManus, a Florida political analyst and professor emerita at the University of South Florida.

“The caution Biden is showing reflects the poor showing in 2020 and a desire not to repeat it,” said MacManus, who added that Haitian Americans are becoming a growing political force in South Florida.

“Democrats learned in 2020 that country of origin is a much more powerful voting cue in Florida than historical voting affiliation, and Trump’s hammering on socialism proved to be an effective message.”

Indeed, as the situations play out in Cuba and Haiti, Biden administration officials have responded cautiously.

The White House on July 11 dispatched representatives from the Justice Department, the Department of Homeland Security and the White House National Security Council to meet with Haiti’s interim Prime Minister Claude Joseph, designated Prime Minister Ariel Henry and Joseph Lambert, the head of its dismantled Senate, whom supporters have named as provisional president in a challenge to Joseph.

White House officials said Haiti’s request for the U.S. to deploy troops was under review. At the State Department, spokesman Ned Price said Tuesday he was not aware that the administration had rejected any request from Haitian officials but said the focus was on supporting the investigation into the assassination rather than providing military assistance.

U.S. officials have also made clear that the administration remains concerned about the infighting over who is rightfully Moïse’s successor in Haiti.

The White House is coordinating with Joseph in his capacity as acting prime minister, but is urging Haitian officials to work together to hold legislative and presidential elections as soon as feasibly possible.

Meanwhile, the White House said a review of its Cuba policy remains underway.

To be sure, U.S. efforts to press for regime change have had their fair share of failures over the years: the 1961 Bay of Pigs invasion, CIA-backed assassination attempts on Cuban leader Fidel Castro, and sanctions that inflicted pain but never produced the ultimate goal of ending communist rule.

“We’re going to be taking a close look at what has and has not worked in the past, and unfortunately in the case of Cuba, there may be more that has not worked than what has worked,” Price said.

This week, Cuban police have been out in force as President Miguel DíazCanel has accused Cuban Americans of using social media to spur a rare outpouring of weekend protests. The demonstrations in several cities and towns were some of the biggest displays of antigovernment sentiment seen in years in tightly controlled Cuba, which is facing a surge of coronavirus cases as it struggles with its worst economic crisis in decades.

There are political crosscurrents for Biden as he addresses both situations.

On Cuba, the political right in the U.S. has accused Biden — who said as a presidential candidate that he would revert to Obama-era policies that loosened decades of embargo restrictions on Havana — of not being supportive enough of Cuban dissidents.

Democrats, meanwhile, are unhappy that Biden has yet to reverse Trump’s hard-line approach to the island’s communist government as his administration carries out its review of Cuban policy.

Trump in a statement criticized Biden’s past promises to loosen restrictions on Cuba. “Don’t forget that Biden and the Democrats campaigned on reversing my very tough stance on Cuba,” Trump said.

Florida Republicans Sen. Marco Rubio and Rep. Carlos Gimenez, a freshman lawmaker who represents a Miami district that Democrats are hoping to flip in next year’s midterm election, were among elected officials this week who called on the administration to maintain Trump’s Cuba policy.

They also called on Biden to aid the protesters, including by making free satellite internet access available on the island to subvert the Cuban government’s effort to stop activists from broadcasting their messages on social media to the world.

Gimenez said in an interview that simply maintaining the status quo is not enough at a moment when the island is seeing some of the most intense pro- tests in more than 60 years — what Biden himself referred to as a “clarion call for freedom.”

Biden lost Florida by about double the margin by which Trump beat Democrat Hillary Clinton there in 2016.

Trump was helped in part by narrowing the Democrats’ margin of victory in population-rich Miami-Dade County by nearly 13 percentage points. Gimenez and another freshman lawmaker of Cuban descent, Maria Elvira Salazar, picked up Democratic-held seats as Trump and Republicans focused on courting Cuban Americans, an important voting bloc in the state.

The majority of Cubans in Florida supported Trump over Biden, 58% to 41%, according to AP VoteCast. The margin was nearly reversed among other Hispanic voters in the state, who were more likely to support Biden than Trump, 59% to 40%.

“Biden is no fool,” said Gimenez. “It’s not just the Cuba issue, it’s the whole issue of socialism and communism and censorship that’s shifted the people of Miami-Dade over to the right. The problem that the president has is the extreme parts of his own party seem to be driving the agenda, and that he just can’t escape right now.”

White House spokesman Chris Meagher said Biden, dating back to his days in the Senate, has been a fierce critic of the Castro regime and is committed to Cuban human rights.

“He’s committed to forming his policies toward Cuba based on two principles: that standing up for democracy and human rights is paramount, and that Americans — especially Cuban Americans — are the best ambassadors for freedom and prosperity in Cuba,” Meagher said.

Carlos Diaz-Rosillo, served as a director of policy and interagency coordination in the Trump White House, said the situations in Cuba and Haiti offer Biden a chance to demonstrate his oft-repeated dictum that democracies can better service their people than autocracies as well as his preference for multi- lateral efforts to address big global problems.

“This is an administration that says that they believe in international organizations and that they believe in these multilateral bodies. If that’s the case, get our allies in the hemisphere together ... and see how they can rally others to help out,” Diaz-Rosillo said.