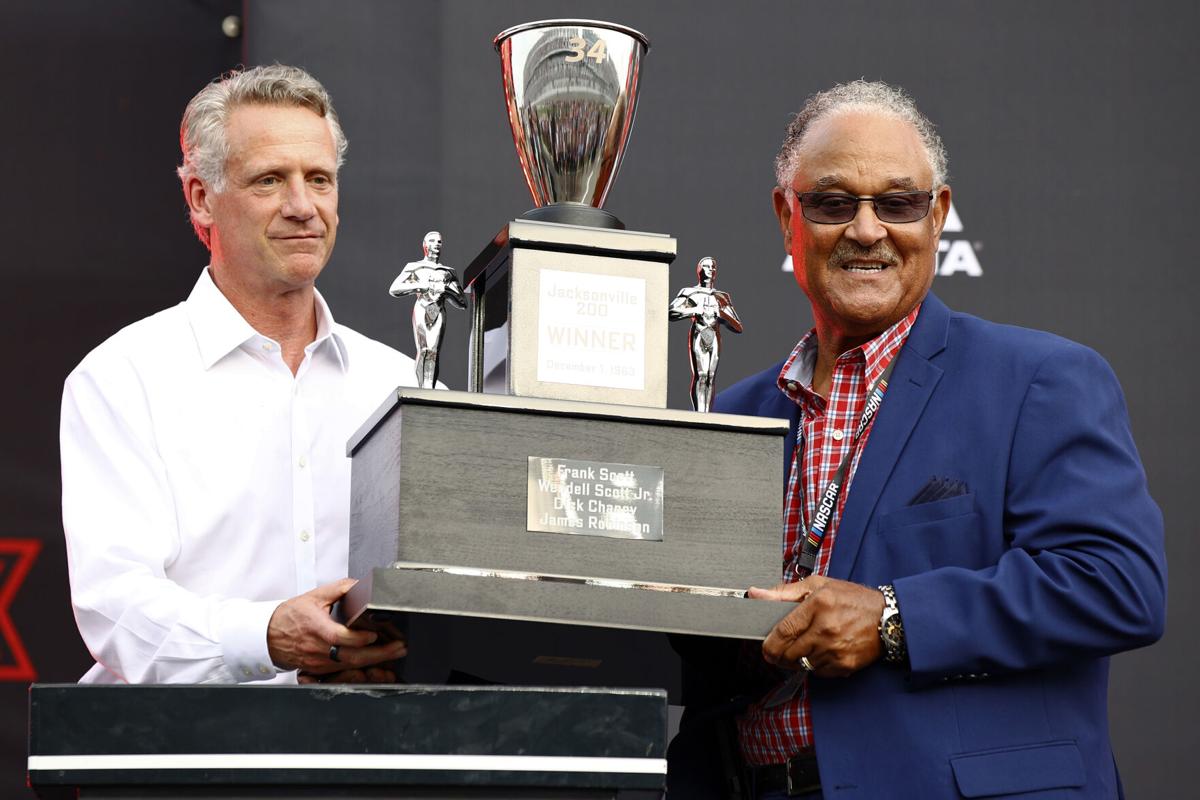 NASCAR President Steve Phelps, left, presents the family of NASCAR Hall of Fame driver Wendell Scott with a trophy for the 1963 Jacksonville 200 win onstage prior to the NASCAR Cup Series Coke Zero Sugar 400 at Daytona International Speedway on Saturday. 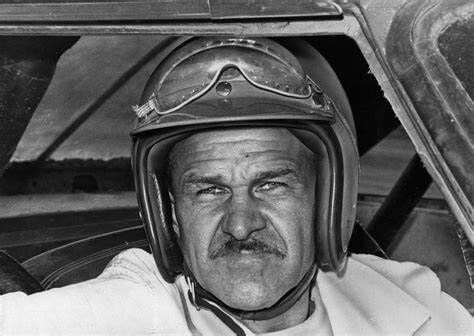 Before Wendell Scott died in 1990, he accurately predicted the future.

The former NASCAR driver, team owner and mechanic had a hunch that he would eventually receive his rightfully deserved recognition.

“He said that ‘I may not be here with y’all, but one day I’ll get my trophy,’” said Frank Scott, Wendell’s son.

In 1963, Wendell Scott won a NASCAR race in Jacksonville. It was an historic victory because he became the first — and to this day only — Black driver to win a race at NASCAR’s top level.

Instead of the fanfare, photos and kiss from the track’s white trophy queen typically bestowed upon the winners, Scott left quietly after the crowd dissipated with his two-man crew and a $1,000 winner’s check.

Despite having crossed the line first, Scott was not initially announced as the winner. Turns out, there was a scoring error, and the popular white driver, Buck Baker, received the celebration earlier.

NASCAR only deemed Scott the winner after he asked for a review. At the time, scorecards were handwritten and “often subject to honest human error or outright cheating,” longtime motorsports reporter Al Pearce wrote in a 2020 Autoweek article.

Scott suspected the latter in his case: cheating motivated by racism. Accounts differ over the race finish and whether the error was intentional, but NASCAR officially recognized Scott’s victory in its record books.

In 2015, he was posthumously inducted into the NASCAR Hall of Fame as a pioneer of the sport. He’s a member of at least six other Hall of Fame classes for his contributions to motorsports, but he never received his NASCAR trophy. Until now.

Almost 60 years after his Speedway Park victory, NASCAR presented the Scott family with a trophy for Wendell’s win. The ceremony took place on Saturday evening before the Cup Series regular season finale at Daytona International Speedway.

For NASCAR, it’s both a correction and recognition of an errant, and oftentimes racist, past.

“One of the very reasons that these drivers strap in every week is for the lure of a trophy,” Brandon Thompson, NASCAR’s vice president of Diversity & Inclusion, said. “So when Frank says Wendell earned that trophy, he absolutely did.”

For the family, which has long felt frustration over the sanctioning body’s failure to ceremoniously recognize Wendell’s win, the moment represents more than a relic.

“The trophy is a tangible artifact that naturally he earned,” Scott’s grandson, Warrick Scott, said. “But it is something that would be a point of inspiration for untold amounts of people going forward.”

Frank and Warrick Scott grew up around racing and are involved in opening the world of motorsports to diverse faces.

They run the Wendell Scott Foundation, a non-profit organization that honors Wendell’s legacy by providing mentoring, STEM engagement opportunities and job skill training to African American communities. They said they plan to build and curate a museum in Danville, Va., which is Wendell’s hometown, and fill it with his racing artifacts. The trophy will be a prime feature.

While the trophy and ceremony are largely symbolic, Frank said he sees the recognition as an example of how NASCAR is working to welcome diversity and make amends.

Last year, NASCAR banned the Confederate flag from racing events after Bubba Wallace, the only full-time Black driver in NASCAR’s national series, called on the sanctioning body to do so. Drivers stood in solidarity with Wallace after a noose was found at his garage stall at Talladega a few weeks later.

“It’s important because I see the growth in NASCAR,” Frank said. “I see growth and diversity that didn’t used to exist, and I think this will lay a really solid foundation to build on.”

The hardware has been custom built for the occasion by Jostens, a company that also supplies NASCAR’s championship trophy and the Daytona 500 winner’s ring. Thompson said NASCAR worked with the Scott family to determine the timing for the presentation, and that Daytona felt like the right spot for multiple reasons.

The driver was born Aug. 29, 1921, in Danville and died from spinal cancer at 69 years old in his hometown.

“All of the stars were aligned, and we agreed with the Scott family that this would be the place in order to make this happen,” Thompson said.

The family was hoping to witness another historic occasion on Saturday as well. They’ve developed a close relationship with Wallace, driver of the No. 23 Toyota for the Michael Jordan-owned 23XI Racing team, and said they were pulling for Wallace to get his first win in the series this weekend.

Warrick said he considered Wallace an “emerging legend himself.”

“My father would be most proud of what Bubba has accomplished,” Frank said. “He used to get calls all the time. Aspiring drivers would say they all want to start on the Cup Series. My father would say, ‘You’ve got to cut your roots first.’ And I think Bubba has done that.”

Wallace won six races at the Trucks level, but never in Xfinity (six top-five finishes) and has yet to win a Cup event in his 137 races in the series. His average finish is 19.8 this season with a team in its first year.

More than a third of his laps led in 2021 have been on a superspeedway, however. He became the first Black driver to lead a lap at the Daytona 500 in February.

“The whole family stands in solidarity behind him,” Frank said. “We believe in him.”

“It’s very poetic that (Wendell’s ceremony) is happening now because of social media and the way you can push a signal out,” Warrick said. “Naturally, he did not get the recognition and the moment, if you will, in Jacksonville that day. He didn’t get that, so this is something that kind of puts a Band-Aid on that. It kind of lets it heal.”

“When I talk with groups of students or when I to colleges or things of that nature, I don’t have to now end my story with, ‘And we never got the trophy.’”