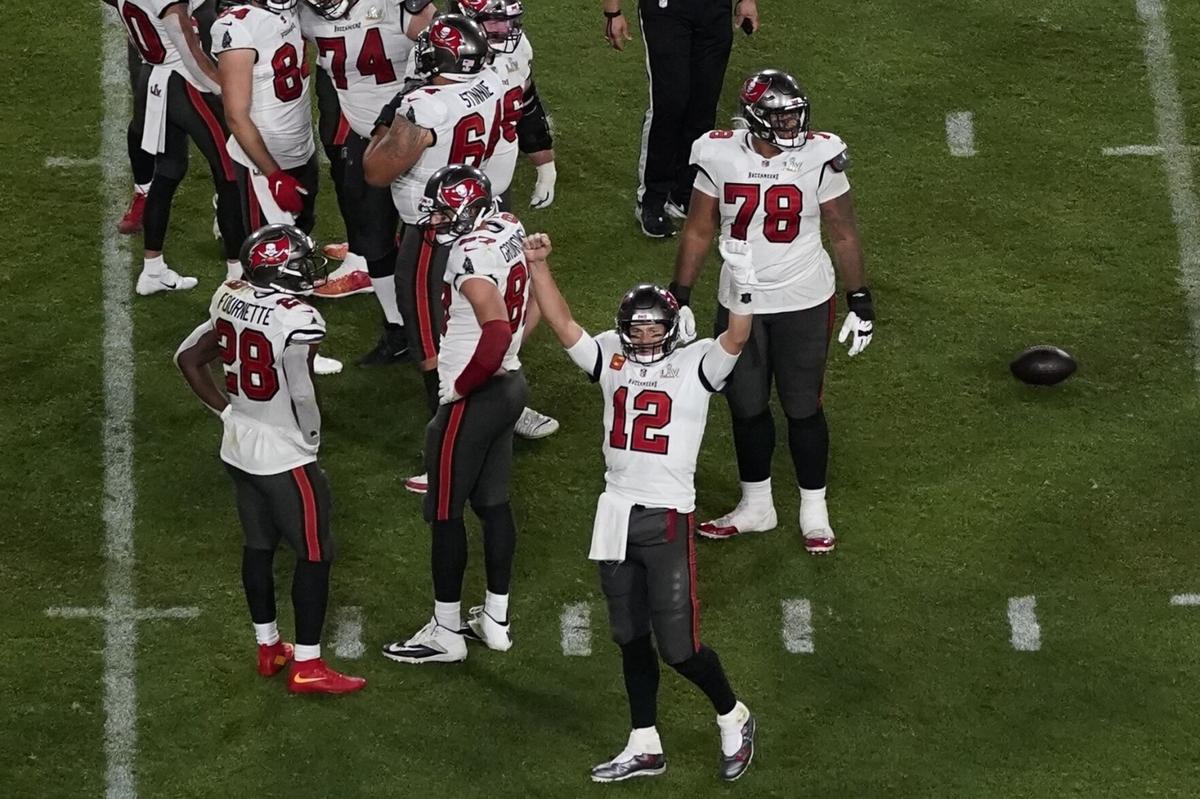 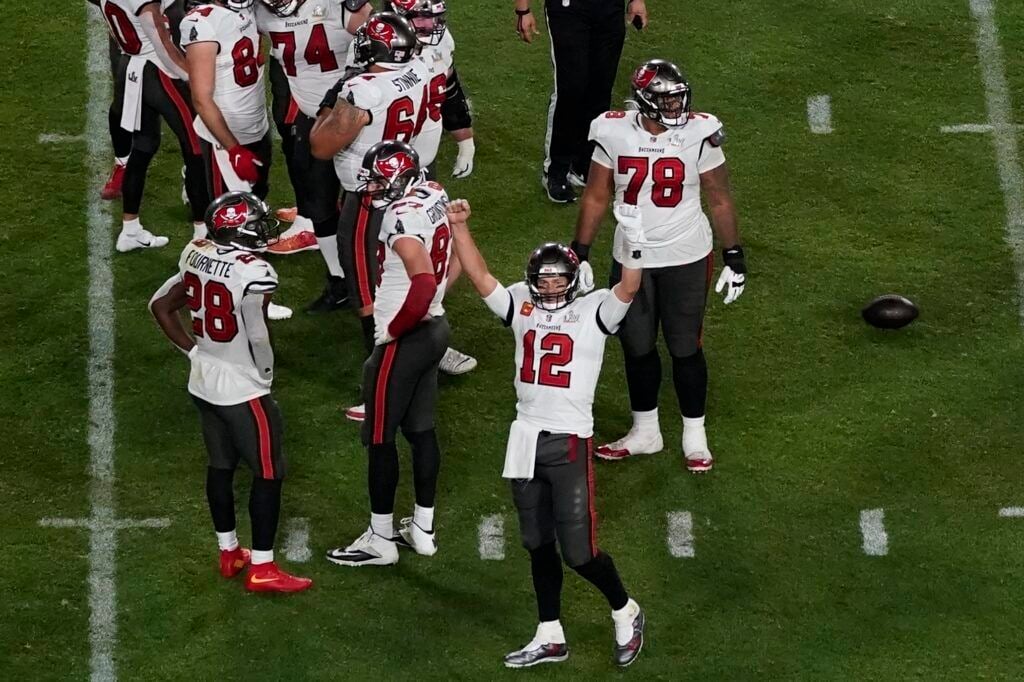 Tampa Bay Buccaneers quarterback Tom Brady (12) celebrates during the second half of the NFL Super Bowl 55 football game against the Kansas City Chiefs on Sunday in Tampa.AP PHOTO/CHRIS CARLSON

TAMPA— Tom Brady’s coming back. So is Bruce Arians.

The Tampa Bay Buccaneers are already thinking about what it’ll take to repeat as Super Bowl champions. The challenge begins with trying to keep some key components together for next season.

Brady threw three touchdown passes on the way to claiming a record seventh NFL title with a 31-9 rout of the Kansas City Chiefs — two to Rob Gronkowski and one to Antonio Brown, both of whom played on one-year deals after being lured to Tampa Bay by the 43-year-old quarterback.

Leonard Fournette ran for the team’s other TD. He, too, joined the Bucs on a one-year contract after Brady reached out to the talented running back since he was released by the Jacksonville Jaguars late in training camp.

If Brady, Arians and general manager Jason Licht have their way, Gronkowski, Brown and Fournette won’t wind up being one-season rentals.

The team is also interested in signing linebacker Shaquil Barrett and receiver Chris Godwin to long-term deals. Defensive starters Lavonte David, Jason Pierre-Paul and Ndamukong Suh can become free agents, although there’s been no indication any is eager to leave.

“I’m very, very confident,” Arians said Monday of keeping the bulk of the roster together for next season. “I have all the trust in the world in Jason and what he will do. There will be dollars involved, but I think this group is so, so close that sometimes dollars don’t matter. But we’re going to do everything we can to get the dollars right, too.”

The Bucs likely have about $38 million in salary cap space, though the 2021 cap number has not been set yet.

Arians also expressed the belief that the Bucs, who rode Brady and a dynamic young defense on an impressive playoff surge that culminated with Tampa Bay becoming the first team to appear in a Super Bowl in its own stadium, can be even better next year.

He and Brady reiterated how difficult it was to navigate this season, the quarterback’s first in Tampa Bay after 20 years in New England, amid COVID-19 protocols that eliminated offseason workouts and preseason games.

“Hopefully, we can keep the band together, have an offseason and actually know what we’re doing (entering next season), ” Arians said. “I think the sky’s the limit for this group.”

Brady, who won his fifth Super Bowl MPV award, was asked Sunday night and again Monday where his first title with Tampa Bay ranks with the six he won with the Patriots. He said every season is different and poses different challenges, though he finally conceded there was something special about what the Bucs were able to accomplish playing through a pandemic.

“It’s great. That’s where I rank it. It’s been a great year, incredibly fun. I think in a unique way it was kind of like, with the coronavirus situation and all the protocols, it really was like football for junkies. There was not really a lot of other things to do other than show up to work and play football,” Brady said.

“If you love football, this was the year to be a player in the NFL because that’s all it was,” Brady added. “It was football camp with all your buddies year-round. I really enjoyed that part.”

Arians, 68, came out of retirement two years ago, inheriting a team that hadn’t made the playoffs in more than a decade. The Bucs went 7-9 in his first season, then hit the jackpot in free agency when Brady decided to leave New England.

Life hasn’t been the same since.

“This was a very talented football team last year, but we really didn’t know how to win. And when you bring a winner in, and he’s running the ship, it makes a total difference in your locker room and every time we step on the field,” Arians said.

“I think the leadership that Tom brings and his attitude of ‘let’s go play, it’s never over till it’s over and we’re going to win this thing,’ somehow, some way, it permeated the locker room,” the coach added. “His belief that we’re going to do this, and knowing he had been there and done it, our guys believed it. It changed our entire football team.”

“B.A. had confidence in us from the moment we got started. And even when we hit a rough patch, he never lost his poise, he never doubted what we could accomplish. He just kept believing we could do it,” the quarterback said.

“When the coach believes it,” Brady added, “the players believe it, too.”