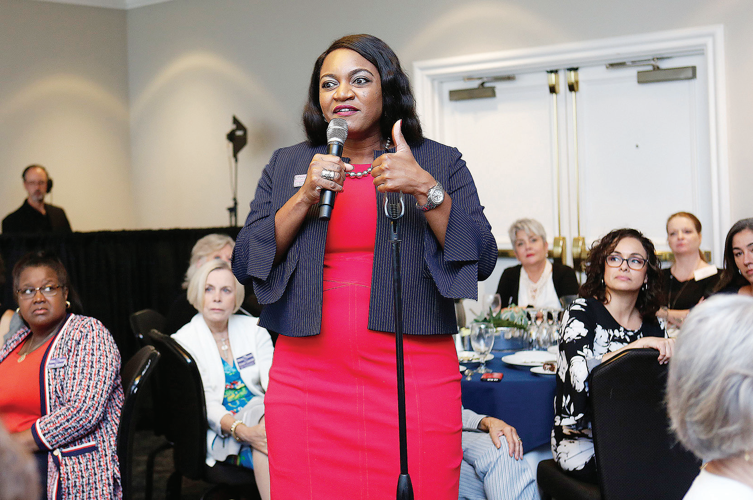 State Rep. Fentrice Driskell (D-FL) speaks at a mayoral panel on the Equal Rights Amendment at the Centre Club of Tampa.

On the heels of winning re-election, Florida Rep. Fentrice Driskell, a Democrat who represents District 67 in the Tampa Bay area, also will serve as the first Black woman leader of the Florida House Democratic Caucus. She will serve in this position through 2026.

She has been a mentor to me and helped me prepare for this,” Driskell said during a recent interview with the Florida Courier.

She was first elected to the Florida House in 2018 in District 63, unseating Republican incumbent Shawn Harrison with more than 53 percent of the vote. Her new District 67 represents the area of Tampa near the University of South Florida and portions of northern Hillsborough County.

The Tampa attorney grew up in Lakeland and attended Harvard University, where she became the first Black woman president of student government. She went on to earn her law degree from Georgetown University.

As a state representative, Driskell sponsored a police reform bill that increased accountability for law enforcement and a bill that created a task force to address the issue of abandoned African American cemeteries across Florida. Both bills passed unanimously during the 2021 legislative session.

She was recently featured in a “60 Minutes Overtime’’ interview with CBS’ Scott Pelley to discuss her House bill 1215 that would have created an Office of Historic Cemeteries in the Florida Department of State. The office would have dedicated state resources to assist in discovering historic cemeteries and help navigate situations where the cemeteries discovered were on private property, Driskell explained during the CBS interview.

A more vocal stance on issues

Driskell takes on the role of leader of the Florida House Democratic Caucus during a time when the party is in the super minority in the Florida legislature. Republicans control more than two thirds of the House seats.

“It is unfortunate because it now means that if Republicans want to close off debate on a topic, they could do it. Any vote that typically would require two thirds in favor of that vote, they now have more than two thirds of the House, so they, therefore, don’t need Democrats on those votes,” Driskell explained.

Driskell said this translates to Florida Democrats not having the votes to block legislation that would further restrict abortion access. She expects Florida Republicans to propose legislation that would further ban abortions after six to 12 weeks. Currently, abortions are banned in Florida after 15 weeks unless a woman’s life is in danger and there is no exception for rape, or incest.

“We don’t have the votes to stop an abortion ban at 12 or six weeks. So, it’s going to be up to the Republicans to really listen to the people and not give in to their more extremist nature and to exercise some self-control when they approach the possibility of passing these bans,” Driskell said.

To combat the lack of votes, Driskell said party members will become more vocal this legislative session to ensure the public is informed. She served on a panel for Reproductive Freedom at the White House on Dec. 7.

“We just don’t have the votes to stop it, but we can certainly use our platform and the bully pulpit to try to get the people involved to make sure their voices are heard and sometimes that can have an impact on the legislative process,” Driskell said.

Looking for areas of alignment

“Florida Democrats believe that every Floridian deserves the freedom to be healthy, prosperous and safe,” Driskell said.

The Democratic party will look for areas of alignment with the Republican party where they can influence the policies and legislation being drafted.

“During the last term, Democrats and Republicans were able to work together to extend Medicaid benefits to mothers post birth for a full year whereas previously it had been less than a year…So that was a huge victory,” Driskell shared. “I think there are oftentimes more areas of common ground than people would think.”

Driskell expects one area of alignment to be improvements to the state’s infrastructure as it relates to traffic congestion and protecting clean water sources. She’s concerned though that Republicans will push more legislation to cater to its far right and support Gov. Ron DeSantis’ agenda without any pushback in order to increase his notoriety nationwide.

“I’m concerned that the Republicans serving in the legislature this term are going to give into the more of the extremist and radical elements of their party because the governor is widely expected to run for president,” Driskell said, stating DeSantis’ desire to run for president is the worst kept secret in Tallahassee. She believes it is “100 percent likely” he will run for president.

State in ‘midst of an affordability crisis’

Driskell calls it a distraction from “the real business that needs to be done” in Florida.

“Florida is in the midst of an affordability crisis. In so many places, people can’t afford rent. There was a time during this past term where I was getting so many calls about people concerned about evictions. Inflation has been hard on all of us,’’ she related.

“I’m grateful to the Biden administration for what they’ve been doing to try to bring that down, but the state of Florida certainly hasn’t been doing its part.

She continued, “Property insurance rates are out of control. In the midst of all these challenges, you have a legislature focused on punishing Disney because the company didn’t agree with a piece of legislation that the governor got passed. It’s childish and it feels like a shell game where they’re playing with people’s lives and not really concerned with meeting the needs of everyday Floridians.’’

During the special legislative session Dec. 12-16, Driskell said her party will push for legislation that provides immediate relief in terms of bringing down property insurance rates.

While the Democrats may be out-numbered in Tallahassee now, Driskell doesn’t believe this downturn for the party will last forever. She predicts the party will fair better and win more seats in 2024 due to it being a presiden-tial election year.