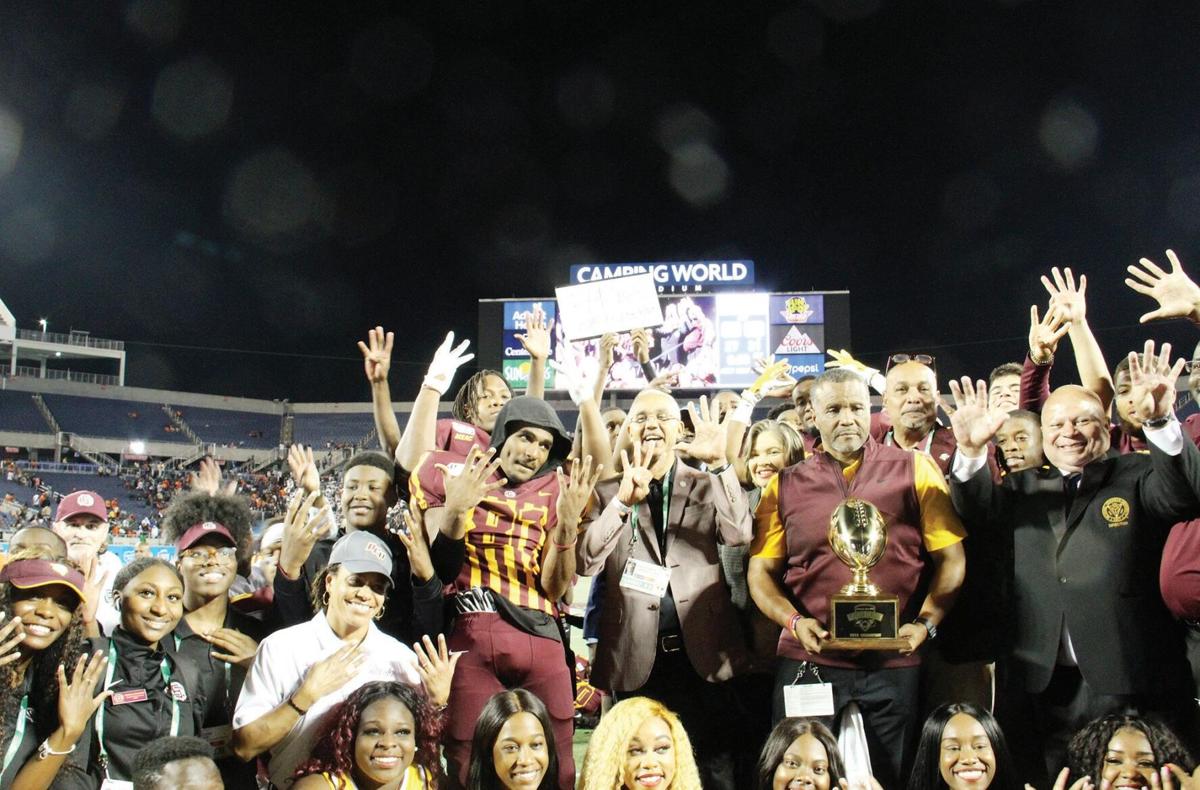 The Bethune-Cookman University Wildcats won the Florida Classic again in 2019 against instate rivals Florida A&M UniversityRattlers. The Classic has been canceled this year because of the coronavirus. DUANE C. FERNANDEZ SR./HARDNOTTSPHOTOGRAPHY.COM 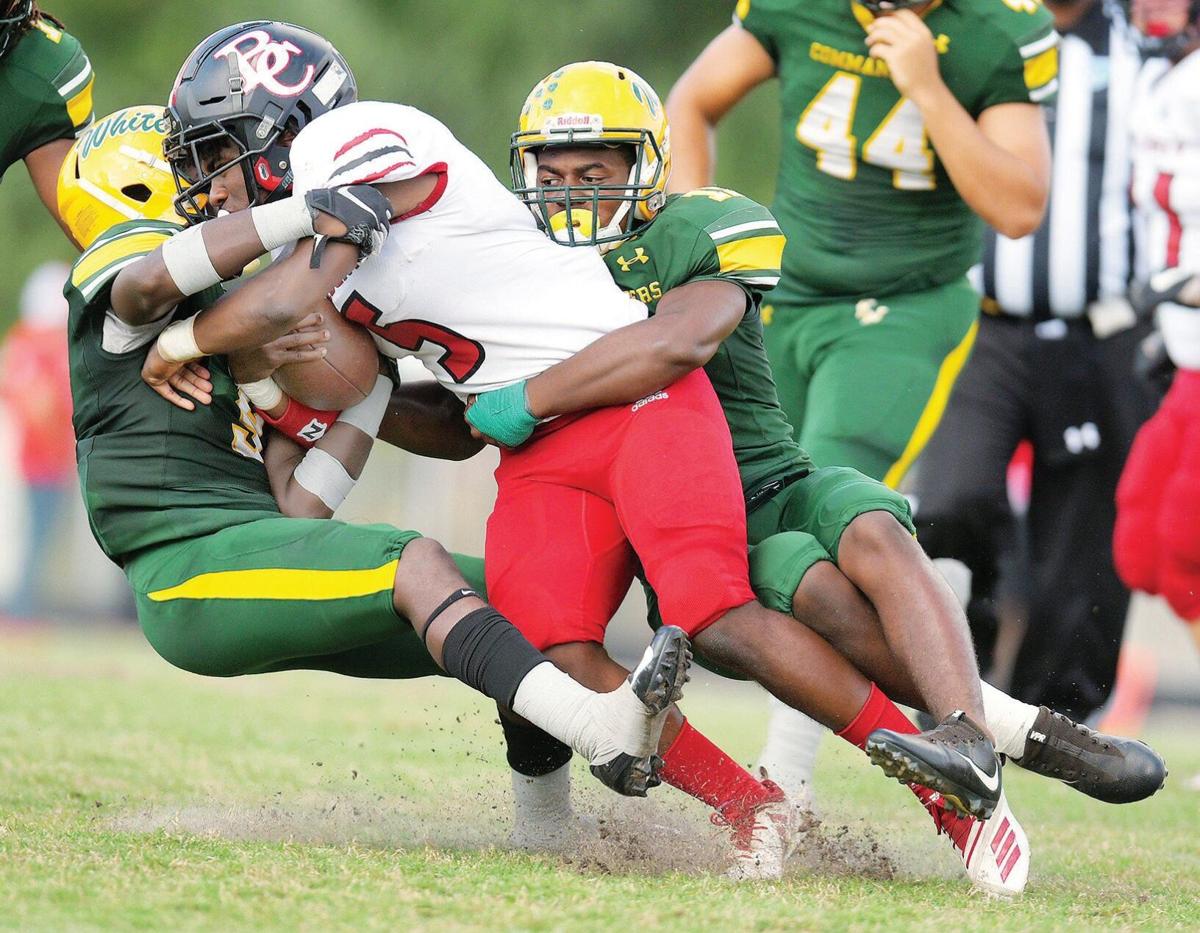 Edward H. White High School’s Tamichael Shellman (9) and Michael James (11) combine to tackle Baker County’s Scooby Graham in a 2019 game. High school football, along with other fall sports, will be on hold for weeks after the FHSAA reversed its course.BOB SELF/FLORIDA TIMES-UNION/TNS

The coronavirus pandemic continues to cause havoc on sports, particularly college football and fall sports.

Health and safety concerns are cited as the virus continues to spread nationwide.

On July 21, the Southwestern Athletic Conference (SWAC) released a statement that announced it is postponing all fall sports.

“Obviously this is an arduous decision because everyone wants to have a fall season for studentathletes, fans and others. Part of our responsibility is to ensure the mental and physical health and safety of our student-athletes, coaches, and staff is paramount. It is imperative that everyone recognize that is our first and foremost responsibility,” commented MEAC Commissioner, Dr. Dennis Thomas.

CIAA and SIAC too

“This was a difficult decision but remains consistent with our long-standing priority of always acting in the best interest of our student-athletes, coaches, and support staff. While there will be no athletic competition in the fall, we will continue to support opportunities that enhance the experiences of our student-athletes, member institutions, and partners,” stated CIAA Commissioner Jacqie McWilliams.

SIAC Commissioner, Gregory Moore echoed, “The action taken by our conference to suspend fall sports was informed by a core desire on the part of our SIAC member institutions to make every effort to protect and mitigate COVID-19 related health and safety risk exposure to our students, coaches, and staff during this uncertain and unpredictable environment.

“It is our intention to seek eligibility relief for those studentathletes impacted by this interruption similar to that relief which was accorded to 2020 Spring sport student-athletes whose seasons were interrupted during the early stages of the COVID-19 outbreak.

No fall sports wipes out two money-making football events for the MEAC and SWAC.

The MEAC/SWAC Challenge opens the season and the Celebration Bowl closes it with the two conferences champions in an HBCU National Championship game.

The conferences earn $1 million apiece from those games. which are owned by ESPN; $500,000 of that in the Celebration Bowl also goes to the schools.

Their annual football game, the Florida Classic in Orlando brings an estimated $35million to the Orlando each year. It’s reï¿¾ported the schools earn about $1.5 million each.

Only Edward Waters College plays football. The Tigers are trying to redo their schedule. They lost six games since they were scheduled to play six SIAC schools.

The SWAC is hopeful to play football in the spring.

A statement on its website says that the conference has started formalizing plans to conduct a competitive schedule for the fall sports during the 2021 spring semester.

The goal is to have a seven-game conference football season beginning with an eight-week training period in January 2021. Its schools will play six conference games (four divisional/ two non-divisional) with the option to play one non-conference game.

It is unsure if the MEAC will follow. The statement on its website says a decision has yet to be made on fall schedules moving to the spring.

Prep sports on hold too

This came a week after they voted to have fall sports go as planned.

The start date for fall sports has been moved from July 27 to Aug. 24.

A statement on www.fhsaa.org says the organization is working on alternative plans for the 2020-21 academic year and plan to vote on those plans during its Aug. 10 meeting.

Football kickoff classics were set for Aug. 12-15 with the season starting Aug. 17. The season will be pushed back.

States like California, Virginia and New Mexico have moved football to spring 2021. New York, South Carolina and Arizona have delayed the start of fall sports.