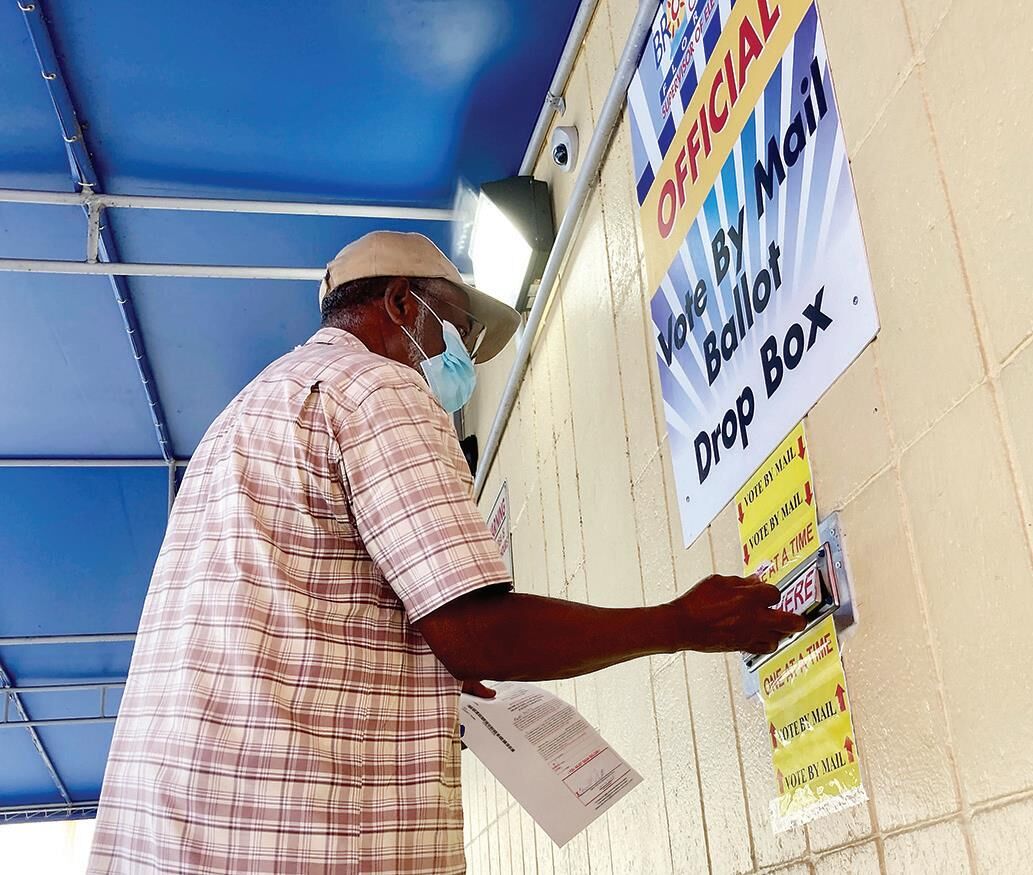 A man drops off his mail-in ballot at the Lauderhill Mall on the first day of in-person early voting on Oct. 19, 2020. AMY BETH BENNETT/TRIBUNE NEWS SERVICE

The Florida Senate proposal, similar to ones passed or being considered by Republican-led state houses throughout the U.S., has sparked outrage from Black legislators and activists.

TALLAHASSEE – A key Senate committee spent hours Wednesday considering a sweeping elections package that would make it more difficult for Floridians to vote by mail but ran out of time before voting on the controversial measure.

The bill (SB 90) would, among other things, curtail elections supervisors’ use of ballot drop boxes; change the process for verifying mail-in ballot signatures; and make it more difficult for voters to change registrations.

The plan could also have an impact on hundreds of thousands of Floridians who registered to vote when they received their driver’s licenses or state identification cards.

The proposal, which is similar to bills being passed or considered by Republican-led state houses throughout the nation, is one of the Florida 2021 legislative session’s most contentious issues.

Senate sponsor Dennis Baxley, R-Ocala, argued the changes are needed to protect against vote-by-mail fraud but acknowledged that Florida’s elections last year ran smoothly and that no evidence of fraud exists.

“I don’t think we should sit on our laurels and congratulate each other on a successful election. Now instead, our time is better spent learning lessons from the problems in other states,” Baxley said.

But Leon County Supervisor of Elections Mark Earley told the committee that several provisions in Baxley’s bill are problematic, including a section that addresses the duplication of mail-in ballots that are damaged or unreadable by tabulation equipment.

Under the proposal, elections supervisors would be required to allow observers “to stand in close enough proximity to observe the duplication of ballots in such a way that the observer is able to see the marking on each ballot and the duplication taking place.”

But Earley said the provision raised serious concerns for the Florida Elections Supervisors association because of space issues and because it could allow dozens of people to be close enough to see personal identifying information about a voters’ secret ballots.

But Baxley said supervisors will have to figure out a way to cope.

“Transparency is troublesome, and I know that it is an implementing problem for supervisors to deal with this,” he said, adding that it “will take some creativity from our supervisors who are incredible at figuring out how to make things work when it’s not easy for them,” he said.

The measure would allow elections supervisors to use secure ballot drop boxes at early voting locations, but Earley said the bill does not appear to allow drop boxes at supervisors’ offices.

The Leon County elections official said his office “received thousands and thousands of ballots through that process” in November.

“Our concern is, are we allowed to continue to have that mechanism to receive our vote-by-mail ballots,” he said.

The elections package also would require a signature on a mail-in ballot to be matched to another signature “in the registration books or the precinct register” that is less than four years old, or to the most recent “wet” signature on record. A “wet” signature is one made on paper with a pen or other writing utensil.

Sen. Randolph Bracy, DOcoee, asked Baxley if the “wet” signature requirement could disenfranchise hundreds of thousands of Floridians whose signatures were recorded on electronic tablets when they received driver’s licenses.

“That would not be my understanding,” Baxley said. “I may be misunderstanding that. … That’s not the intent. It’s that somebody, someplace in the state of Florida … validated them and that we are securing that original signature somewhere.”

Baxley’s responses about the signature matches and to other questions left Bracy and his Democratic colleagues dissatisfied.

“We are literally going to wipe millions of people off the rolls by requiring this wet signature. I can’t even believe we are doing this. And Sen. Baxley didn’t even bat an eye. It’s unfathomable what’s happening with this bill,” Bracy said. “I think we are drunk with power when you are talking about how far you are willing to go on this bill. We’re literally removing possibly millions of people off the rolls. … I just can’t believe it.”

Black Voters Matter co-founder and executive director Cliff Albright said a coalition of groups is calling on the Florida companies to stop contributing to the campaigns of Florida House and Senate members who support the elections measures.

“There is no balanced approach to Jim Crow,” Al-bright told reporters during a video conference call Wednesday. “You’re either on the side of democracy or you’re not.”

Baxley told the committee his proposal, which is similar to a House measure (HB 7041), is unrelated to racism.

“I don’t buy the whole Jim Crow story. I’m sorry that that’s out there,” he said, adding that the bill aimed at erecting “guardrails” around the state’s vote-by-mail processes.

But Sen. Perry Thurston, a Fort Lauderdale Democrat, said the bill is not about fraud.

Thurston argued that Jim Crow-era laws were not identified when they were enacted as being designed to make it harder for Black people to vote.