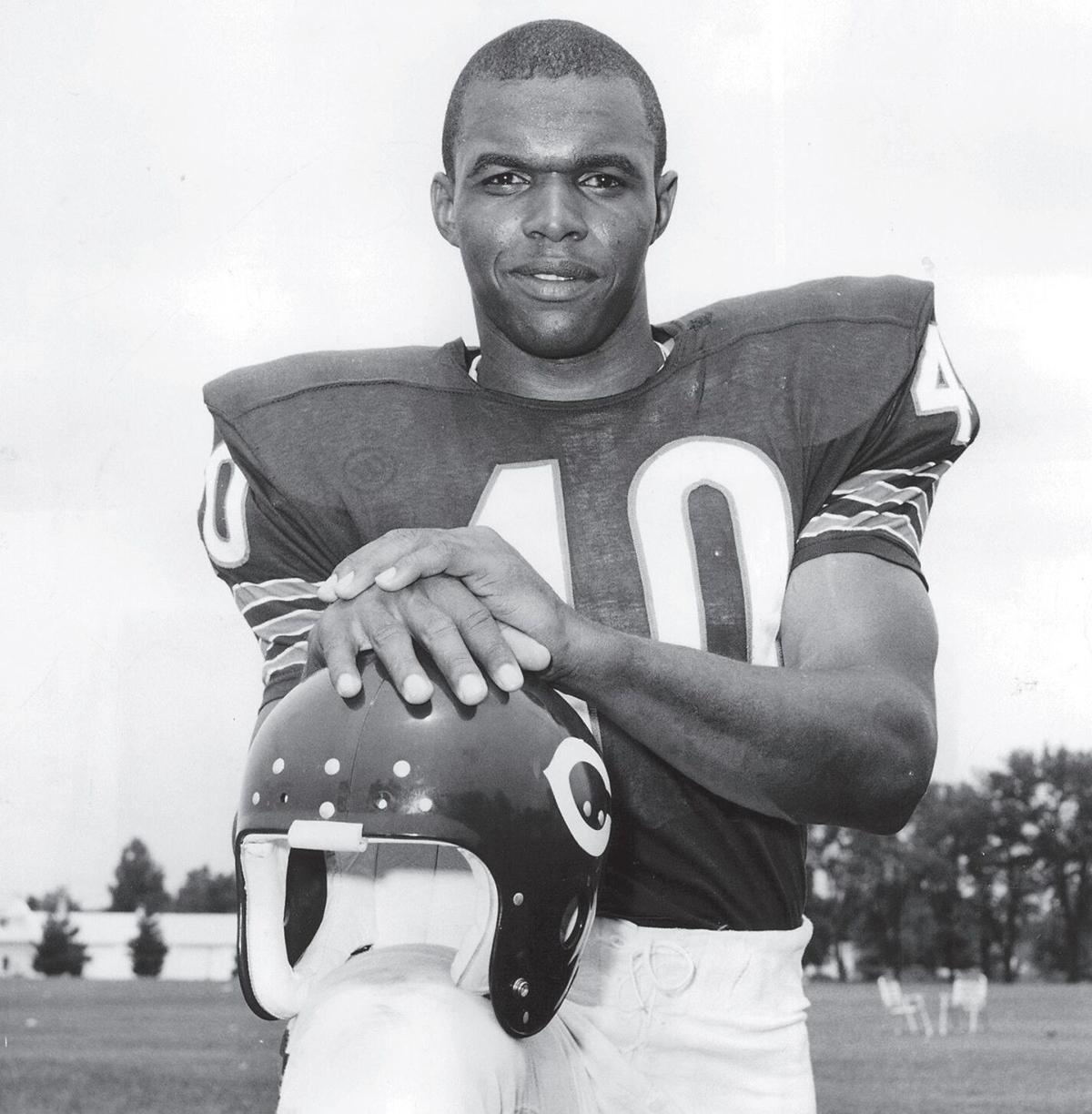 Gale Sayers is pictured in the late 1960s. His close relationship with teammate Brian Piccolo, who died at age of 26 in 1970 from a rare form of cancer, is documented in the movie “Brian’s Song.’’ PHIL MASCIONE/CHICAGO TRIBUNE/TNS 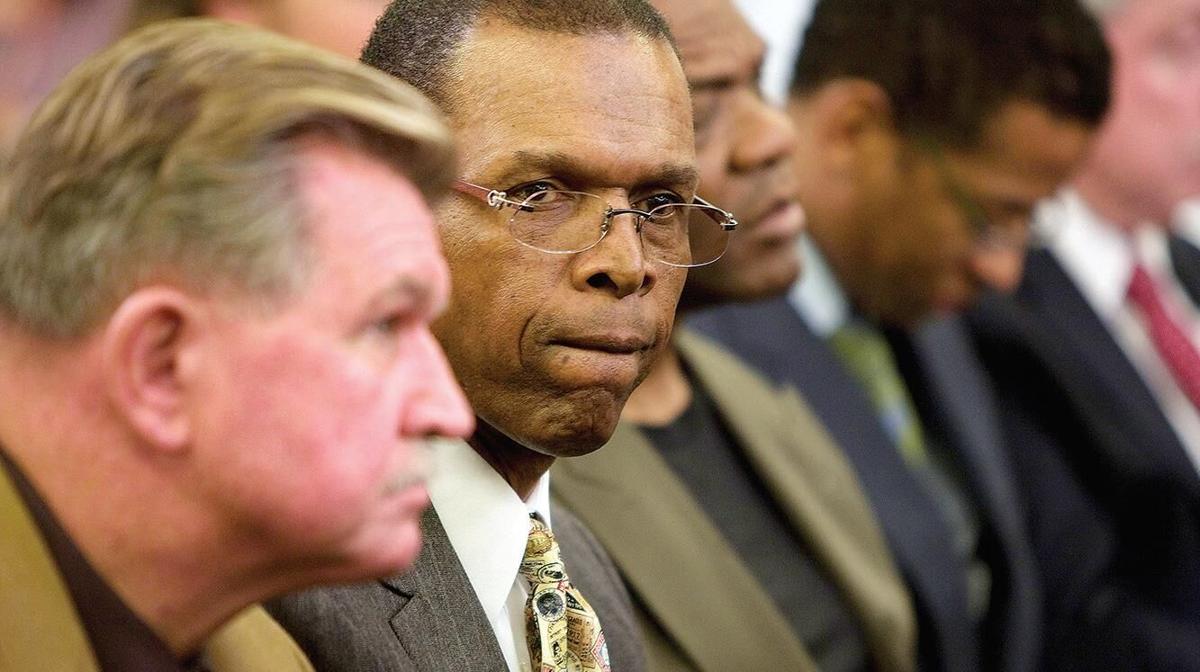 Hall of Fame running back dies at 77

BY RICH CAMPBELL AND FRED MITCHELL

The “Kansas Comet,” as Sayers was nicknamed, was one of the most agile and elusive ball carriers ever. “If you wish to see perfection as a running back, you had best get a hold of a film of Gale Sayers,” Bears founder George Halas said in 1977 when he presented Sayers for Hall of Fame enshrinement. “He was poetry in motion. His like will never be seen again.”

Sayers’ dynamic running ability helped him earn All-Pro recognition in each of his five full seasons. It also left teammates, coaches, fans and pundits to wonder what he might have accomplished in football had knee injuries not ended his career in 1971 after only seven seasons (68 games).

In fact, Sayers’ legendary athleticism was a bittersweet topic at the Bears 100th Celebration in June 2019, as former teammates tried to make sense of how the electric running back they revered could be the same frail, wheelchair-bound man who appeared on stage.

“If I wanted one (running back) for a season, I’d take Walter Payton. But if I wanted a player for one play, I’ll take Gale Sayers above every running back I’ve seen — whether it be Jim Brown or O.J. Simpson or anybody” said Johnny Morris, a teammate of Sayers’ for three seasons in the mid-’60s.

“He had a knack of being in the air and he’d swing his leg over and come down in a different direction. That’s the best way I can put it.”

Sayers rushed for 4,956 yards and scored 56 touchdowns in his career. The four-time Pro Bowler ranks fourth on the Tribune’s list of top 100 Bears players all-time and fifth on the team’s list. “I had a style all my own,” Sayers is quoted as saying by the Hall of Fame. “The way I ran, lurchy, herkyjerky, I kept people off-guard so if I didn’t have that much power when I hit a man, hell, he was off balance and I could knock him down.”

Sayers amassed 9,435 all-purpose yards, which ranks fourth in Bears history behind Payton, running back Matt Forte (12,718) and return specialist Devin Hester (10,196). “Just give me 18 inches of daylight,” he once told NFL Films. “That’s all I need.”

Gale Eugene Sayers was born May 30, 1943, in Wichita, Kan. He was raised in Omaha, Neb., and starred in football and track at Omaha Central High School. He set the state long jump record of 24 feet, 11 3/4 inches. At Kansas he became a two-time All-American in football.

The Bears drafted Sayers fourth overall in 1965. Remarkably, it was only one spot after the Bears picked future Hall of Fame linebacker Dick Butkus, all All-American out of Illinois. “Both had unusual running movements,” Halas wrote in his autobiography.

“I’ve never seen anyone run with Gale’s agility. No one ever caught him from behind. Butkus was bow-legged. I learned later Butkus had knee injuries in high school and college. Both had rare abilities, supported by courage, desire and spirit.”

Butkus was unfamiliar with Sayers before they met in New York after the 1964 college season. They had gathered for a celebration hosted by the Football Writers Association of America and Look Magazine, which published the FWAA’s All-America team each year. “I’m looking at this guy with the high-tops and he’s running back kickoffs and everything else,” Butkus recalled at the Bears100 Celebration.

“I didn’t know who in the heck he was, but he was amazing on that game tape.”

Butkus remembered how Bears veterans made it difficult on their rookie class.

“Gale just ran circles around everybody, so they quickly adopted him,” Butkus said. “He was amazing. I still attribute a lot of my success to trying to tackle him. I never came up against a running back like him in my whole career, as far as a halfback. No one could touch this guy.”

Sayers set the Bears’ single-season touchdowns record with 22 as a rookie (14 rushing, six receiving and one each on kickoff and punt returns). He went on to be named NFL Rookie of the Year, and his touchdowns record stood until 1975 as the NFL mark for all players regardless of tenure.

On Dec. 12 of that season, Sayers scored six touchdowns on a muddy Wrigley Field, tying the NFL’s single-game record. He carried the ball only nine times from scrimmage — and scored on four. “He looked like he was gliding,” teammate Mike Ditka recalled at the Bears100 Celebration. Everybody was slipping and sliding except him. It was the most unbelievable exhibition I’ve ever seen in the history of the game.”

Injury changed it all

Sayers won the NFL rushing title in 1966 with career-best 1,231 yards in that 14-game season. But in 1968, nine games into his fourth season, Sayers suffered his first catastrophic knee injury. The play — “49 Toss Left” — was called in the huddle by quarterback Virgil Carter. It was designed to be run to the outside of the left tackle.

It called for Sayers’ blocker, Randy Jackson, to lead the way, but instead of waiting a half second for the play to unfold, Sayers instinctively ran up on the heels of his blocker.

Sayers planted his right leg to make a cut, but San Francisco 49ers right cornerback back Kermit Alexander lunged ahead and pounced on his leg. Sayers was carried off on a stretcher as the Wrigley Field crowd gasped and feared the worst.

The play occurred right in front of the Bears’ bench, as Halas described in his autobiography.

“His helmet crashed into Gale’s knee,” Halas wrote. “My heart sank. I knew Gale would not get up. I cried with him as he was carried off. He was such a magnificent person and a great player. What pained me so much was the type of man who had been hurt.”

Sayers was taken to the hospital and was on the operating table for three hours. He later would learn that the ligaments on the medial side were destroyed, as well as the anterior cruciate ligament.

During an era prior to arthroscopic surgery, Sayers endured months of tortuous rehabilitation. Amazingly, he returned for the 1969 season to run for 1,032 yards and win the rushing title, although it was clear he no longer had the elusiveness to cut on a dime, which had been his signature.

In 1970, Sayers suffered a second knee injury, this time to his left knee. During that time off he took classes at New York University to become a stockbroker. Following another rehabilitation period, Sayers tried for a comeback, but was not successful.

He was enshrined in the Hall of Fame at age 34. During his induction speech, he emphasized how important it was for pro football players to remain “mentally afloat.”

“I meant to seek out offseason job opportunities when I came to the game,” he said. “I did from the start. In my first three years, I had job opportunities from two companies. It kept me mentally afloat and gave me the incentive to go back to school and finish my undergraduate degree and my master’s degree. It brings to mind what I was all about in the first place. I went to college not as an athletic student, but a student athlete.”

Indeed, Sayers returned to Kansas in 1973 to work as an assistant athletic director. Sayers became director of the Williams Educational Fund, the primary fundraising body for Kansas Athletics. During that time, he earned his master’s degree in educational administration.

After three years at Kansas, he took the athletic director’s job at Southern Illinois in 1976. Following five years in that position, he formed his own sports marketing and public relations firm, which evolved into Sayers Computer Source. The firm began in 1982 as a computer supplies re-seller.

Sayers’ legacy is partly defined by his close relationship with teammate Brian Piccolo, who died at age of 26 in 1970 from a rare form of cancer. Sayers and Piccolo were believed to be the first interracial roommates for a major professional sports organization. Their story was documented in an Emmy award-winning made-for-TV movie called “Brian’s Song.”

In May 1970, Sayers famously honored Piccolo when he accepted the George Halas award, which is given annually by the Pro Football Writers of America to the NFL player, coach or staff member who best overcame adversity to succeed.

Sayers was honored for his 1969 season in which he won the league’s rushing title in his comeback back from multiple torn knee ligaments. Sayers knew Piccolo was very ill; as it turned out, he died three weeks later.

“You flatter me by giving me this award,” Sayers said in his speech. “But I tell you that I accept it for Brian Piccolo. It is mine tonight. It is Brian Piccolo’s tomorrow.”

Sayers’ condition began to starkly deteriorate shortly into the 2010s. He was diagnosed with dementia in 2013.That year, he sued the NFL claiming the league negligently handled his repeated head injuries during his career. He said he suffered headaches and short-term memory loss after retirement.

In the lawsuit, Sayers claimed he sometimes was sent back into games after suffering concussions and that the NFL overall didn’t do enough to protect him from the “devastating concussive head traumas.” Sayers’ brain health worsened to the point he could barely speak by the Bears100 Celebration.