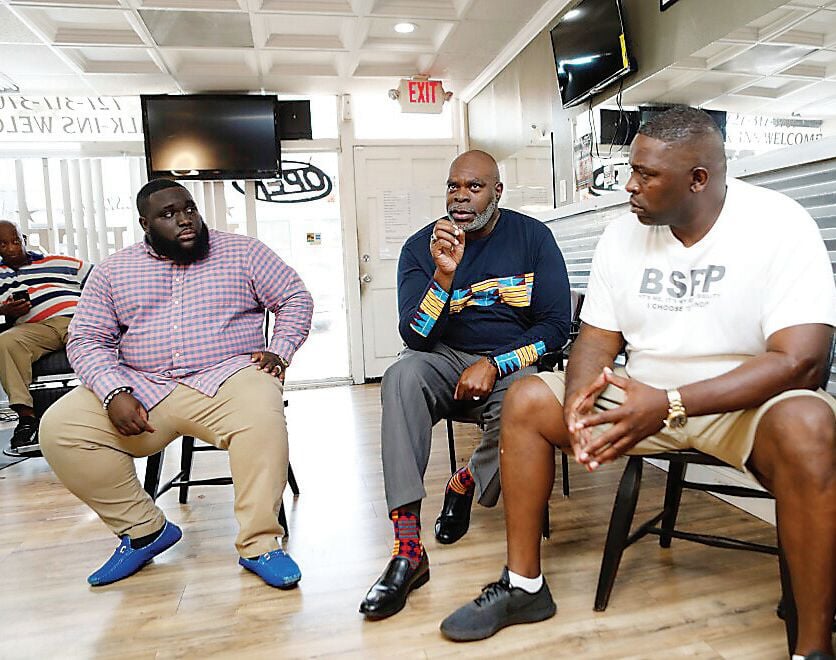 S. Kent Butler (center), president of the American Counseling Association, led a group of men in a conversation about mental health at a barbershop in St. Petersburg as part of a Healing While Black summit. 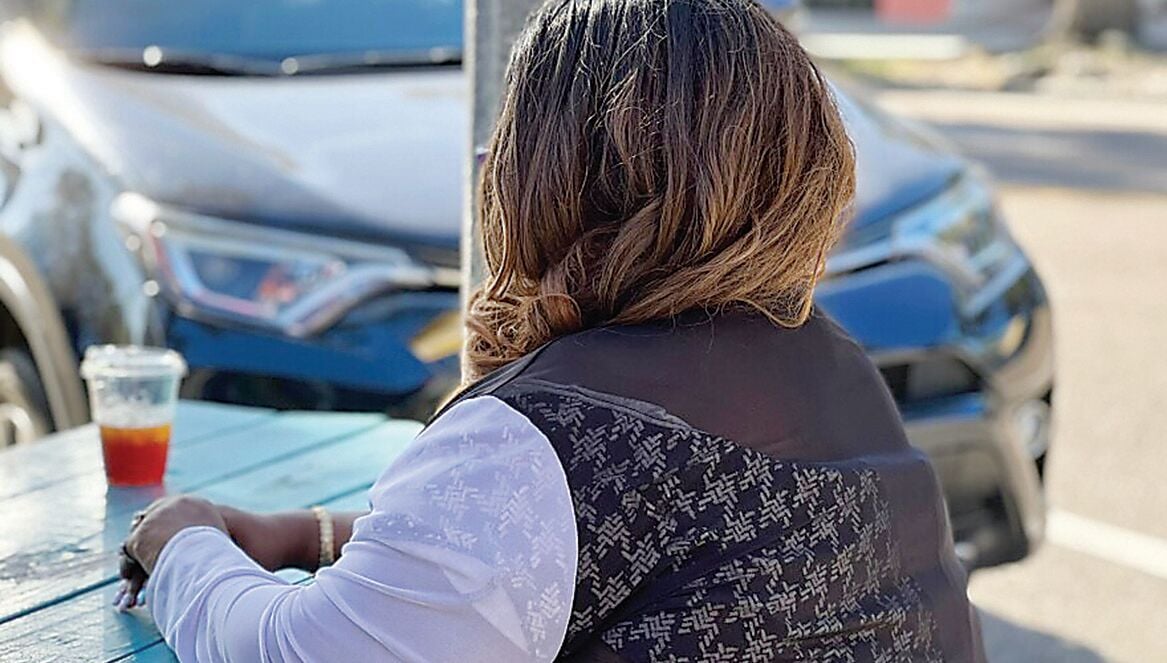 For St. Peters-burg resident Vickye, quarantining during the pandemic meant being trapped at home with her abusive then-wife. She said she’s struggling to find consistent care now to treat her trauma.

Editor’s note: This story is part of a WUSF Public Media series titled “Unequal Shots,’’ stories that focus on the voices of residents in communities of color and how Florida’s handling of the coronavirus pandemic and vaccine distribution affects them. The Florida Courier is providing the story through a partnership with WUSF.

The COVID-19 pandemic continues to stress the mental health of many people. But it’s been especially hard for some Black Americans, who have been disproportionately affected by the virus and already faced barriers to care.

Vickye, 52, has Lupus, so like many people at risk for severe COVID-19, the St. Petersburg resident spent most of last year at home. She avoided getting sick, but quarantining took a toll in ways she said she couldn’t have imagined.

Vickye was trapped with an abusive wife, which is why we’re not using her last name. Verbal assaults turned physical, until this past February, when Vickye said her now ex-wife shot her six times for threatening to leave.

Vickye has recovered physically for the most part and the case is working its way through the Pinellas County court system. But her emotional wounds are taking longer to heal.

The COVID-19 pandemic continues to stress the mental health of many people. But it’s been especially hard for some Black Americans, who have been disproportionately affected by the virus and already faced barriers to care.

The CDC also says Black and Hispanic people  were twice as likely to die from COVID-19 and nearly three times as likely to be hospitalized with the disease than whites. They were also more likely to lose work or have demanding front-line jobs.

“Stress related to the uncertainty and the impact of self-isolation, worrying about the transmission of COVID-19, concerns about job security, all likely exacerbated the feelings that people had,” said Reggie Williams, vice president of international health policy and practice innovations with the Commonwealth Fund.

The murder of George Floyd and other police killings of Black individuals –and the civil unrest that followed – added more trauma.

The Commonwealth Fund surveyed residents of the United States and other high-income countries last year about their health concerns and Williams published an analysis of the mental health results this October.

It found more than 50% of Black Americans who reported having mental health needs also had cost- related problems accessing health care, second only to Hispanic Americans. Black respondents were also most likely to have multiple chronic health conditions and had the highest rates of avoidable emergency room visits.

This year, the nonprofit Mental Health America ranked Florida 49th in the nation for access to care  when looking at the 50 states and District of Columbia. Only Alabama and Texas performed worse. The ranking accounts for things like mental health workforce availability and access to insurance and treatment for both kids and adults.

And there are other barriers. Vickye said societal pressures on Blacks also make it harder to seek help.

“As a Black woman, no matter what you go through, what trauma, you still have to deal with the kids, still have to cook, still have to clean, you have to put on this mask like everything is alright, like there’s nothing that can hurt you. You know, you have to be Superwoman,” she said. “And I think a lot of us don’t deal with our trauma and our grief because we’re just meant to go on.”

Resilience is something members of the Black community should be proud of, according to LaDonna Butler, a counselor who found- ed the Well for Life in St. Petersburg. The organization serves as a healing space for Black and indigenous people of color.

But Butler said assumptions about that resilience can perpetuate stigma about mental health and create gaps in care.

“Because when people believe you are so strong, they often don’t create systems or strategies that will allow you to seek help with the great pride that you have,” she said. “And when people don’t feel seen, heard or respected, they’re less likely to get help.”

Inside St. Petersburg’s Central Station Barbershop & Grooming on a late July afternoon, S. Kent Butler, president of the  American Counseling Association  and professor at the University of Central Florida, led a dozen or so men in a discussion about mental health. The buzz of a trimmer occasionally accompanied the conversation as a few attendees got their hair cut while they chatted.

“How do we break that stigma about going to see a counselor?” Butler asked the group, adding that some people associate seeking mental health treatment with weakness.

Maress Scott, a St. Peters- burg resident and anti-gun violence advocate, suggested Black men be more vocal about their emotions and show younger members of the community that it’s OK to seek help.

Some men reflected on their childhoods and how difficult circumstances forced them to toughen up at a young age.

John Muhammad’s voice rose as he argued that white people have created many of the mental health challenges Black Americans face through a history of slavery, Jim Crow laws and other forms of oppression.

And the men said racism continues to plague mental health in the Black community.

Butler talked about how police violence against Black people makes him feel anxious in public even when he knows he’s not doing anything wrong. He told the men in the room Black people continue to battle post-traumatic stress because the hardships keep on coming.

“It’s real, CTSD: Continuous Traumatic Stress Dis- order,” said Butler as members of the group nodded their heads in agreement. “That’s all we have in our community. CTSD, not

“I say this all the time: Every time I walk out of my house, I know I’m walking out as a Black man, and I know that doesn’t mean I’m going to walk back in. And that’s continuous, that’s what that anxiety is.”

Butler told the group it’s important to acknowledge those emotions and give themselves permission to heal. Many men walked out hugging each other.

Experts say one positive thing that has come out of the recent civil unrest over racial injustice and the COVID-19 pandemic is that more people are having these kinds of conversations about mental health and improving equity.

LaDonna Butler with the Well for Life said she’s been especially inspired by young people.

“They’re talking about counseling and mental health at rates that I’ve not seen,” she said. “So, I think it’s also brought to our tongue the power of mental health and the importance of really taking care of yourself because we really do matter.”

Embracing mental wellness is important, but advocates say serious changes also have to be made to the health care system and other areas of society to ensure everyone gets the help they need.

Butler has been advocating to bring trauma recovery centers to the area. These centers offer comprehensive services to survivors of crime and other forms of trauma—from counseling to legal aid to emergency relief—and have been successful in other states like California and Illinois.

Butler said she also wants to see more community spaces encourage mental health discussion so people can relate with others and connect to resources in places where they already spend their time, like beauty salons and churches.

Integrating mental health care with other services is one of the recommendations Reggie Williams with the Commonwealth Fund makes in the report he co-authored on mental health needs in the U.S. and other countries.

It’s also critical to expand the mental health workforce and the use of digital technology, he said. Lastly, he said, communities have to address the economic and social conditions that can exacerbate people’s anxiety and depression, what he calls the social determinants of mental health.

“Do people have roofs over their head? Do they have food in their bellies? Do they have a sense of fulfillment from the work that they may be participating in?” Williams said. “Those things all become extremely important when you think about addressing mental health services.”