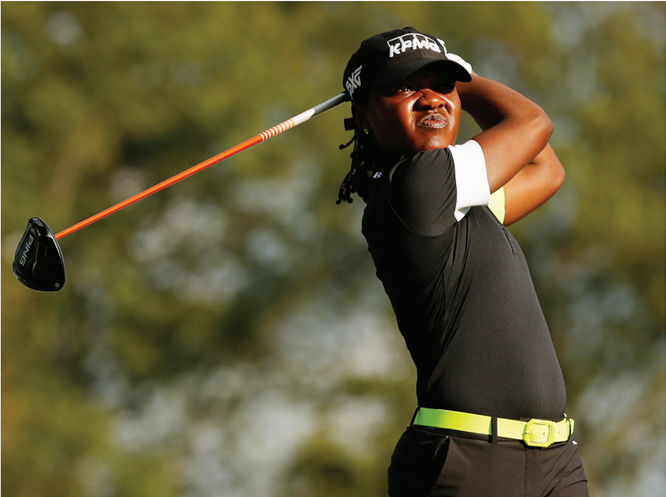 Mariah Stackhouse hits her tee shot on the 6th hole during the first round of the Cognizant Founders Cup at Mountain Ridge Country Club on Oct. 7 in West Caldwell, New Jersey. Stackhouse is the lone Black golfer on the LPGA Tour. 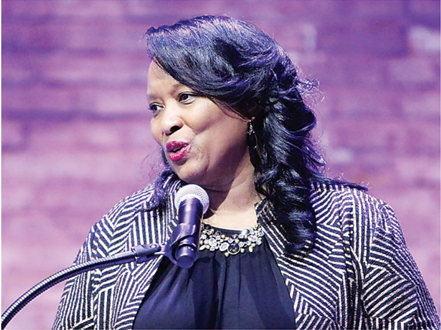 Clemmie Perry speaks after receiving the 2018 WAVES Award during the Centre for Women Waves of Change Luncheon at Armature Works in Tampa.

TAMPA — It didn’t take Clemmie Perry long to realize she stood out on the golf course.

It wasn’t because of her lack of skill or that she was a middle-aged woman just starting to learn the game.

She was the only Black woman on the course.

Perry’s experiences prompted her to take everything she had and pour it into her own programs, Women of Color Golf and Girls on the Green Tee.

“I didn’t see minority women like myself out on the green,” Perry said. “What I realized was that half of my life was over, but I had to change it very quickly for the women and girls behind me.”

When Perry started doing research and talking to professionals in the game, she discovered a glaring set of numbers: More than 24 million people played golf in the United States, but only four million were minorities and only 1% were women of color.

Since 2014, Perry’s programs have impacted more than 1,000 girls and women in the Tampa Bay area.

The LPGA Tour, which was in Belleair last weekend for the second annual Pelican Women’s Championship, knows the organization has room to grow when it comes to diversity.

“I’m a huge believer in the game of golf changing lives,” LPGA commissioner Mollie Marcoux Samaan said. “I think it’s our responsibility, actually, to give this game to people who otherwise might not have it and who might not feel comfortable in the game.”

‘Treasure in the trash’

Perry was looking for ways to fill her time when she lost her job as a corporate executive at Lockheed Martin. She had always wanted to learn to golf, but a hectic work-life balance didn’t allow it until 2012.

As luck would have it, her younger brother, Ross, found an old set of clubs sitting on top of a trash pile at the intersection of PGA Boulevard and Prosperity Road while driving around Palm Beach Gardens.

“There was a treasure in the trash,” Perry says now. “It changed my life.”

Her love for the game deepened with every outing. And because golf changed her life, she wanted it to help change others’, too.

After a year of training, Perry decided to create a community of women golfers, so she started coordinating clinics and groups at Golfer’s Grail of Tampa.

Seeing young girls fall in love with the game was her greatest reward. She enjoyed watching them pick up a set of clubs for the first time and make contact with the ball on a successful swing.

She started offering summer camps, but it wasn’t sustainable when the pandemic hit in March 2020.

“As doors kept closing,” Perry said, “I had to keep figuring out what to do.”

A legacy to build upon

Perry’s family helped shape her outlook on what it means to make real change.

Her mother, Doris Ross Reddick, was the first Black woman to chair the Hillsborough County School Board, where she served for three terms from 1992-2004.

Her grandmother, Clemmie Ross James, was a civil rights leader who taught in the county in the 1940s. She waived her Florida teacher retirement savings to teach students in the Tampa Bay area, working more than 40 years as a teacher and assistant principal at Lomax Elementary.

Everything came full circle in the spring of 2021 when Perry was looking for the right partner schools to work with her programs.

When she walked through the doors of Clemmie Ross James Elementary, she saw her grandmother’s portrait hanging on the wall in the school office before she met with the school principal.

In the spring of 2021, Perry’s youth program piloted at Clemmie Ross James Elementary. This month, she finished the pilot program at the school named after her mother.

“Both of their schools represent their life,” Perry said. “Clemmie Ross James in East Tampa serves marginalized girls and students that are African American … and Ross Reddick serves a Hispanic population, which were the two demographics the golf industry is trying to reach. I just said, ‘I found my place.’ ”

Building blocks to something greater

When Perry first started her organization, she had two mentors who helped her move the programs along.

Renee Powell made history as the second African American woman to play golf on the LPGA Tour — after Althea Gibson — in 1967. She retired in 1980 and was inducted into the PGA of America Hall of Fame in 2017.

Running a course out of Canton, Ohio, Powell connected with Perry and discovered that they shared a kindred spirit. Today, Powell is one of three people on Perry’s key advisory board.

“She took me under her wings,” Perry said. “I listened to her, and she guides me to this day.”

In addition, Perry sought help from Michael Cooper. The former director of diversity for the World Golf Foundation has helped develop the First Tee program in the Tampa Bay area.

Women of Color Golf and Girls On the Green Tee was named the PGA Tour’s Charity of the Year in 2020. In 2016, Perry was recognized by the Obama administration as one of its 10 “Champions of Change” for “extracurricular enrichment, after-school and summer programming for marginalized girls, including girls of color.”

In 2017, Perry was selected as one of the Tampa Bay Lightning’s Community Heroes, receiving a $50,000 donation that went to her Women of Color Golf program, the Florida Sports Hall of Fame, Where Love Grows and the Centre for Women.

This year, her programs were recognized by Saudi Arabia’s Aramco Oil for being a Driving Force in Diversity.

The LPGA recognized its diversity shortcomings last summer following months of social unrest driven by the killing of George Floyd while in police custody in Minneapolis.

The Tour does not have a demographic breakdown of its players but keeps track of players’ home countries. More than 47 countries are currently represented between the LPGA, Symetra Tour and Ladies European Tour.

“Mariah is just one example of an amazing role model,” Samaan said. “... I think that it is extremely helpful to have role models, but we have to put forward the grassroots programs and put the resources toward it to introduce people to the game.”

In February, the organization launched “C-Me,” a play on the CME Championship held at the end of every year on the LPGA Tour.

“C stands for Commitment and Me stands for each individual making a personal commitment to listen, learn and be better on this topic,” the organization wrote on its website. “The ‘C-Me’ also has another meaning. It’s about women and girls seeing other individuals who look like them in golf.”

Former LPGA commissioner Mike Whan wrote in the same month that 2020 was a year of personal growth for him as he learned and listened to those around him and paid particular attention to the Black players on the tour and their experiences.

“As much as I wanted to believe that the LPGA was a discrimination-free zone, hearing personal stories made me realize we still have work to do,” he wrote. “We are the leaders in bringing gender diversity to golf, but we can (and should) be so much more than that.”

Samaan, who became commissioner in August, has kept the diversity conversation going.

“We believe deeply in diversity, equity and inclusion,” Samaan said. “And we really believe in giving this opportunity to young kids who might not otherwise have the opportunity or they’re under-resourced kids from different backgrounds who don’t feel comfortable in the game.”

The LPGA is focused on working with its foundation board to create a strategy on how they can bring more children to golf, Samaan added.

With the U.S. Golf Association, the PGA Tour and the PGA of America, the LPGA also is a sponsor for the “Make Golf Your Thing” initiative, which focuses on making golf accessible to everyone. Still, work remains to be done.

“It’s critical to see someone that looks like you in almost anything that you do,” Perry said. “You have to show representation for people to feel welcome and that you can do it. ... If you can see it, you can be it, but if you never see it, you don’t know that it’s even possible.”